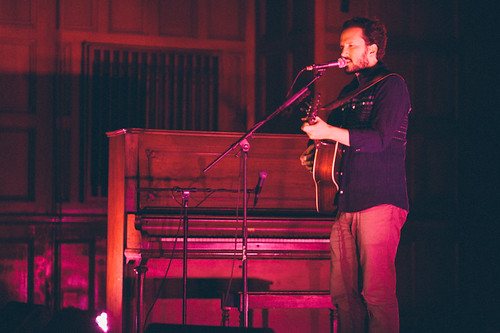 Photos and words by Maximilian Ho
Inside the cavernous First Unitarian Church, folk singer/songwriter Mason Jennings sang and strummed his guitar as the audience listened intently. Hoots and hollering could be heard every time Jennings played his harmonica. Jennings ditched his guitar for the piano on a song or two. Before playing a new song called “The Florida Song,” Jennings told the audience stories about his travels to Florida and how they inspired him to write the song. As he played the main riff to the song, a few fans cheered in approval. Towards the end of the set, several fans shouted out requests for songs and Jennings kindly obliged. Behind me, a die-hard fan sang along to the lyrics of “Ulysses.”

Canadian singer/songwriter Lucette played beforehand, as her enigmatic voice and formidable skills as a pianist were on full display. In addition to playing songs like “Muddy Water” and “Bobby Reid,” Lucette performs her own rendition of “Amazing Grace.” Recently Lucette’s song “Black is the Color” was featured on an episode of Vampire Diaries.