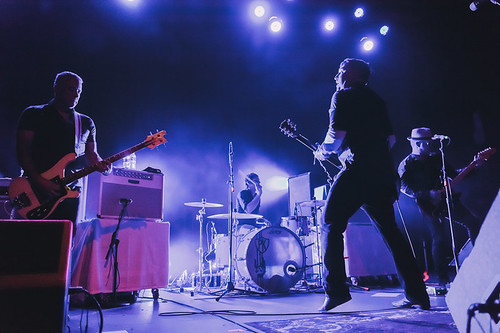 Photos and words by David Valera
The Afghan Whigs made a quick stop in Hollywood and sonically blew the roof off The Fonda Theatre. The legendary rock n’ roll band is on tour to promote their first new album in over 15 years, Do to the Beast on Sub Pop Records.
Frontman Greg Dulli began the night with muscular whispers and melodic guitar riffs that gradually progressed to growls and roars on “Matamoros.” “Algiers” is a pure indication The Afghan Whigs have evolved their sound into a more sophisticated and cinematic experience. Local and loyal fans swayed and sang the lyrics to “Fountain and Fairfax,” a song about drinking that is ironically also an intersection just a few miles down the road, where AA meetings take place.

Second on the bill, was a one-man performance by Joseph Arthur. Arthur, the looping guitar and box-stomping specialist, paid tribute and covered many songs from his mentor, Lou Reed. It was just a year ago that Lou Reed died, which made Arthur’s performance a very special and meaningful one.
I like surprises and Arthur surprised everyone with his multitasking talents by first creating looping guitar riffs, then singing “I Miss The Zoo” while creating canvas art. Someone in the crowd offered $100 bucks on the spot which Arthur replied, “I’m a terrible businessman, but let’s talk it over at the merch table.”
The blue-hued LOU MAN GROUP kicked off the evening with rocking pop, a fog machine and confetti bazookas.


Setlist:
Parked Outside
Matamoros
Fountain and Fairfax
The Lottery
Step Into the Light
Now You Know
Algiers
Royal Cream
I Am Fire/Tusk (Fleetwood Mac cover)
Gentlemen
Turn On the Water
It Kills
Can Rova
John the Baptist
My Enemy
Son of the South
Lost in the Woods
Encore:
Every Little Thing She Does Is Magic (The Police cover)
Heaven on Their Minds / Somethin’ Hot
Going to Town
Across 110th street (Bobby Womack) / Faded
LITTLE DRAGON @ THE OBSERVATORY
THE GROWLERS’ THIRD ANNU...