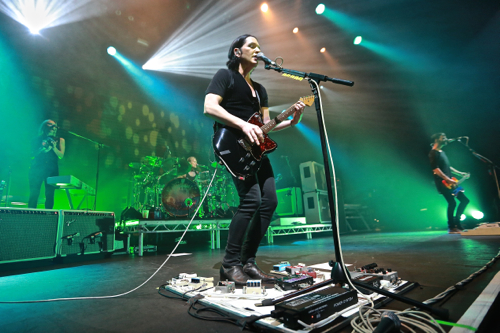 Photos and words by Cortney Armitage
The lights came up on Brian Molko (vox/guitar) at Club Nokia and washed his pail skin green. As he approached the mic, the corners of his mouth turned up with a wicked grin. He paused, baiting the crowd, then unleashed “B3” and the ground under our feet started pulsing like the beginning of a slow earthquake. Placebo fans had lined up for hours before the doors open to watch their favorite band, which also includes founding member and guitarist-bassist Stefan Olsdal and drummer Steve Forrest, who explained how they change names of the protagonists to protect those in their songs. It had been a year since Placebo last visited Los Angeles, and this time upon concluding their set, Forrest took center stage and held up one of his drums, on which was written in large black letters,”THIS ONE’S FOR YOU MOM,” but it felt like it was for all of us.
Now based in LA, The Moth & The Flame gave it their all as they opened the night with their brand of lush, atmospheric rock. 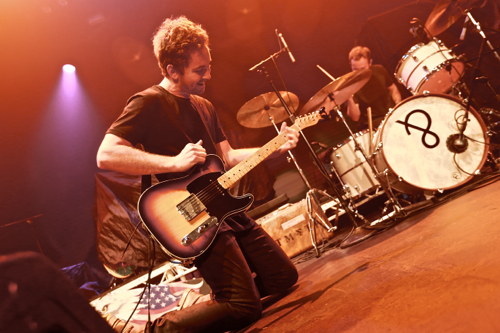 Set List :
Intro (Pure Morning and Svefn-g-englar mash-up)
B3
For What It’s Worth
Loud Like Love
Every You Every Me
Scene of the Crime
A Million Little Pieces
Twenty Years
Too Many Friends
Rob the Bank
Purify
One of a Kind
Exit Wounds
Meds
Song to Say Goodbye
Special K
The Bitter End
Encore:
Begin the End
Running Up That Hill (Kate Bush cover)
Post Blue
Infra-red
MARKÉTA IRGLOVÁ + ROSI GOLA...
BROKEN BELLS @ THE ORPHEUM THE...