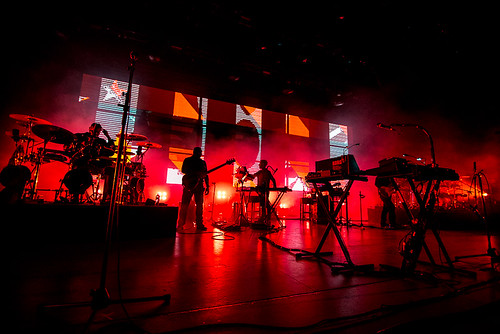 Photos and words by Debi Del Grande
Music v. Industry, LA craptastic traffic, clear to engage, refugees in the millions – like, follow, accept, delete.
How lucky we were that the smooth, yet oh so powerful sounds and messages of Massive Attack had fans at the Greek Theatre swaying and transfixed on the stage as our visual and auditory senses were on overdrive the entire set. The artistic musicianship of Robert “3D” Del Naja and Grant “Daddy G” Marshall were back after a long absence and were warmly welcomed.
Vocalist Martina Topley-Bird and her really long gold eyelashes commanded the stage on many songs, including the enchanting “Teardrop.”
“You’ll have to imagine we’re a bunch of DJs playing our new single, ‘Angel'” Del Naja stated as Horace Andy didn’t make it to LA in time for the show.
It’s hard to believe “Pray for Rain” from Heligoland has never been played live – until last night. TV On The Radio lead singer Tunde Adebimpe did it justice.
Everyone in Sections B and C appeared finally relieved to stand up and jam to the incredible vocalist Deborah Miller on “Unfinished Sympathy.”
Message received loud and clear.