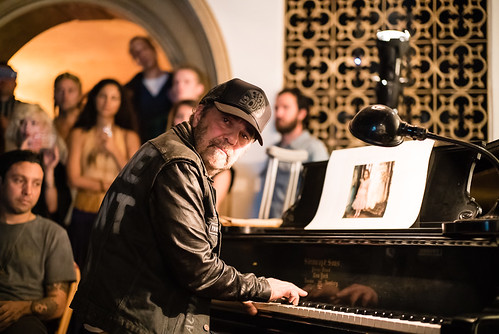 Photos and words by David Valera
Daniel Lanois, multiple Grammy Award winner/singer/songwriter/producer previewed material from his upcoming album Flesh and Machine, a rebirth for this prolific artist. A few fortunate guests were invited for an intimate performance at his home studio, La Bella Vista. Lanois spoke about the future of music and his part in its evolution, his drive to embrace technology, and link it intrinsically with the human touch during the creative process. Pushing toward a next dimension of sound and uncharted territory, “Opera” started the electro portion of the set, with a droning, heart thumping ambient baseline that takes you on a journey. Thrusting you into a cerebral atmosphere of samples and sonic indulgence, the tempo builds into a crescendo of trip hop beats. The live performance also featured drum extraordinaire, Brian Blade.

Syncopated with each song, a series of collaborative multi-media art films submitted from renowned filmmakers were cleverly projected onto a window screen. One of the visuals shown at the beginning was a 150-year-sold animation piece, which fascinated everyone in attendance. Lanois is touched by the devotion it took, every image painstakingly rendered by human hand, in contrast with today’s computer generated effects. The second half of the set Lanois presented new sounds on slide guitar, piano and electric guitar. He made the correlation of how he, as an artist, is exploring the interplay between instruments and technology, hence the title Flesh and Machine, co-engineered with Alex Krispin.

Lanois stated, “For years I’ve been doing the hard labor in the studio and most people don’t really see what we do or hear what we do, ‘cause often times there are so many minor details in a vast production. We decided to take the recording studio to the stage, we like the challenge of the stage.” “There’s a resourcefulness that kicks into play in the presence of an audience and we like that.” Their tour will begin in November. Lanois unique synergies between live instrumentation, the sampling, dubbing and processing, is bound to be a magical experience for all. Thanks were given to ANTI-Records.