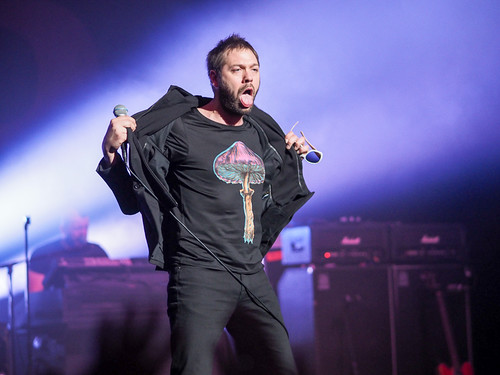 Photos and words by David Valera
“L.A., you are Empire!” exclaimed Kasabian frontman Tom Meighan commanding attention as the British rock group invaded the hallowed walls of The Wiltern Theatre. It was an intimate affair for the Leicester guys since they regularly sell out arenas and headline major festivals on the other side of the pond.
Alongside Meighan, bandmates Sergio Pizzorno (guitar/vox), Chris Edwards (bass), Tim Carter (touring guitar) and Ian Matthews (drums) buzzed the crowd into a kinetic frenzy with their dynamic opener “Bumblebee” to kick off the show for their new album 48:13.
48:13 is the final run time of the album but it is hard to ignore the much discussed correlation with Isaiah 48:13 “My own hand laid the foundations of the earth, and my right hand spread out the heavens; when I summon them, they all stand up together.” Coming together, Kasabian fans rather sinfully danced the night away to break out beats of “Days are Forgotten” and “eez-eh, while inhibitions were checked at the door. Meighan, in his Paul Smith mushroom t-shirt, roused everyone with mic stand gyrations, the (British) V sign followed up with the middle finger provoked the feverish crowd into sustained madness. Beloved “L.S.F” brought the night to a close. 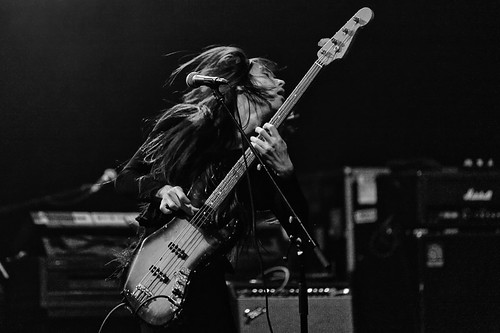 Bo Ningen, the London-based Japanese quartet, kicked off the evening with their hair flippin acid-rock performance and tunes from their latest III. The robes, screeches and wails makes one think of a Godzilla movie mixed with a taste of The Ring. Taigen Kawabe’s evil showmanship is certainly a sight to behold in person.