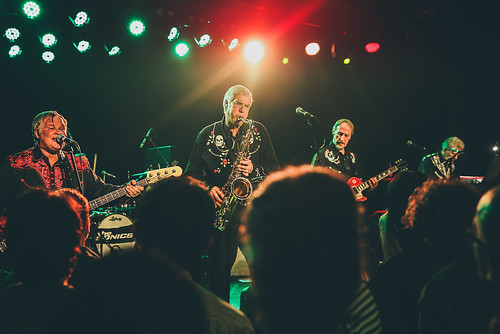 Photos and words by Debi Del Grande
There were many options Friday night for your live listening pleasure. But when a legendary band that you’ve never seen before is playing, you go. A group from Tacoma, WA that started in 1963 and paved the way for so many bands for a garage rock sound that is fast and ferocious shook The Roxy’s walls. Age and time has not affected their sound a bit – a tad louder maybe. No one I spoke to had ever seen The Sonics play in LA (have they ever?), so it was a special treat to hear the band (including three original members) rock better than most bands in their 20s. The crowd was a mix of all ages and a few young girls (who sang every word to the songs) jumped up on stage. We even heard some new tunes and their new album is coming soon.

And speaking of the 60s, East LA’s Thee Midniters brought the house down with brass, spunk and fire. Some true blue musicians up on stage. Here’s hoping to more gigs.


Crystal Antlers had no problem being on a bill with two legendary bands. It was odd, however, not to see anyone moshing, but I’m sure that changed at Echo Park Rising.