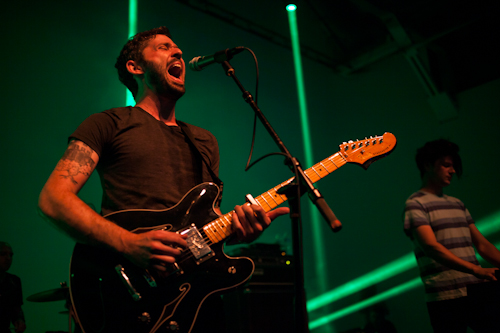 Photos and words by Emily Cohen
The legendary Mack Sennett Studios was the perfect location for The Antlers to play a dreamy and intimate set. The Brooklyn band garnered, what some estimated to be, a couple hundred fans to the fifth and last “Pandora Presents: Stubhub’s Next Stage” concert series, having the crowd almost lap a square Los Angeles block hours before doors opened.
For a relatively mellow band, they filled the house with their powerhouse instrumentals and tunes from their fifth studio album, Familiars. The crowd clearly enjoyed their variety of technicality in the performance; “They didn’t have this many wind instruments last time. This is awesome!” an excited fan exclaimed mid set.
Some fans were even driven to tears, overcome with the excitement of the show that Peter Silberman, Darby Cicci, and Michael Lerner brought. Fans could be overheard saying, “Are you already tearing up? I’m already tearing up.”