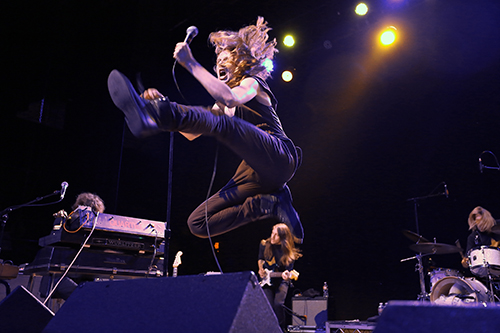 Photos and words by Cortney Armitage
If the rumors of the magical night that Ziggy Stardust and Iggy Pop were together are true, it produced a love child and that love child now fronts the band called Foxygen. Sam France is the perfect blend of Iggy’s wild child and and Ziggy’s alien sexual ambiguity. At the sold out show at the Fonda, France was a dynamic, in-your-face artist who tackles each song with reckless abandonment. He was often spotted leaping off the stage in an almost desperate frenzy to touch the crowd before changing direction and sometimes almost leaping right out out of his jumper. His sweet high vocals blend perfectly with the 60s psychedelia and avant-garde sound to the music he and other core member Jonathan Rado create together. The pair are an exciting blend of high engery and mellow, reflected in the masterfully woven layers of music and melody.


Bag lady, sparkly 70’s glam rocker, space adventurer and a missing member of Pussy Riot. Gary Wilson’s experimental set had the added drama of his mannequin’s lovers infidelity, as the hunt for the illusive paramours identity served as the climax to his set. Was it you Frank Roma?