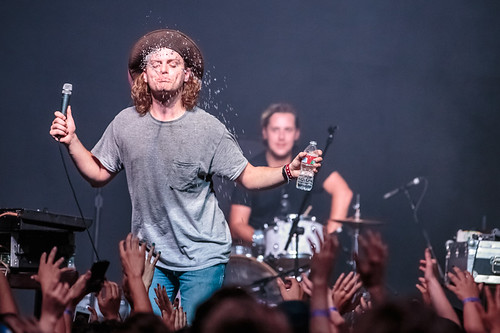 Photos and words by Scott Sheff
Mac DeMarco had the crowd on their knees at the sold-out Fonda Theatre. Literally.
The indie rocker from The Great White North closed out the night with homage to the godfather of Canadian rock—Neil Young –and a cover of his classic tune “Unknown Legend.” He and seemingly everyone connected with the tour took the stage and had the crowd get on their knees in respect of the great Neil Young and sing the song. Of course fans of DeMarco obliged his request (although some needed a little humiliation and ridicule from the band before they complied), but the problem was that the predominantly young crowd not only didn’t know the lyrics, but many didn’t even know who Neil Young was.
However, after letting the crowd struggle at singing along (probably DeMarco’s true intention), the entire ensemble gathered on stage jumped in to save the day and sang the song together, resembling a “We Are the World” moment with so many people gathered on the stage.
The fun wasn’t just saved for the end, but sprinkled throughout the show. From swapping hats with a fan to swapping spit with his bassist and spitting water on the crowd, DeMarco kept it light-hearted and carefree, reflective of his laid-back calypso sound.

Sadly for Calvin Love (and fans, too), who played just prior to DeMarco, his set was dramatically cut short as the curtain fell on the stage just as he was telling the crowd they had time for one more song. Such a shame, too, because it was a great set and everyone was really into the show. But with only five minutes until DeMarco’s set time, the decision must have been made in order to keep on schedule. 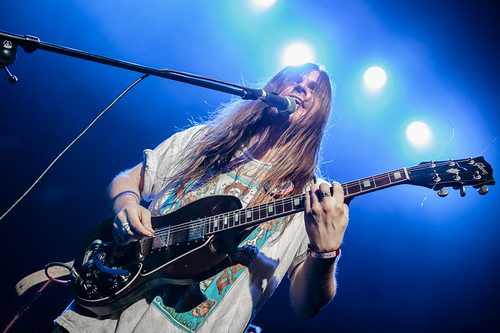 Making their last appearance on the tour while the rest continued on, hometown boys Meatbodies (formerly Chad & The Meatbodies) got the biggest, most rowdy response from the crowd with their high-energy, hair-flingin’ set of hard rock filled with originals and covers. Of all the bands that played the night, it seemed Meatbodies created a more an ambitious mosh pit and crowd surfers. That’s saying a lot given how crazy fans can get for DeMarco. 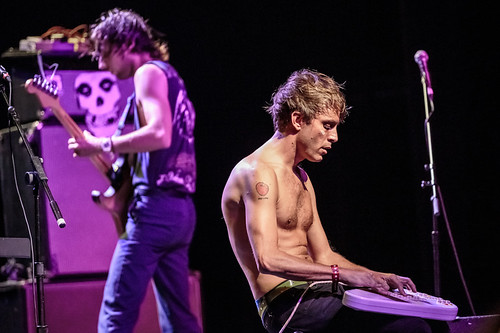 Kicking off the night with an eclectic set mixed with sounds new and old, Holy Shit killed it right out of the gate with an instrumental jam that finished as strong as it started. A few songs into the set—and much to the delight of the young ladies in the crowd—lead singer Matt Fishbeck took off his shirt and performed the rest of the set bare-chested.