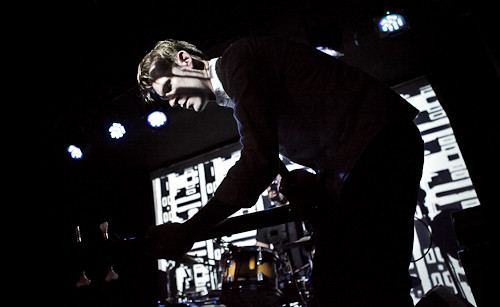 Photos and words by Abby Linne
LA’s own intellectual art-rock trio, Facts On File, celebrated the release of their album Bring It Back at El Cid. In front of geometric projections, the band performed an uptempo set featuring driving bass lines, snap-crackling snares, and growly guitar. The sound is something that could have echoed from a basement in Olympia, WA back in the 90s, if somehow those riot rockers had convinced Byrne or Bowie to lend vocals to the band. It’s not hard to imagine this music beaconing out across music festival grounds in the future, spurring sweaty festival-goers to jump around in the sun.