SHARON JONES AND THE DAP-KINGS + VALERIE JUNE @ THE WILTERN THEATRE 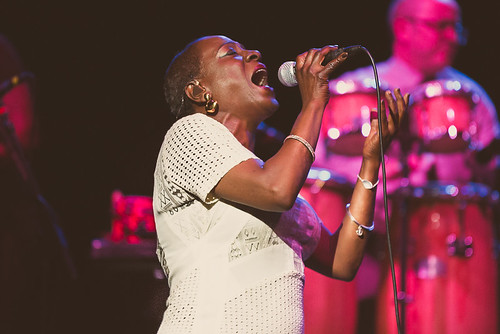 Photos and words by Debi Del Grande
2014 is R&B singer Sharon Jones’ year and she has a lot to shout about. Kicking cancer to the curb, a snazzy new album called Give the People What They Want and so much more. The Wiltern crowd embraced Jones and the Dap-Kings with open arms. She didn’t have to be concerned about the way her nails, toes and her hair would look. She has better things to do. Before Jones made her appearance, the Dap-Kings and Saun & Starr got everyone moving and grooving. And then the woman herself arrived to thunderous applause.
Jones doesn’t stand still when she’s on stage. Moving from one end to the other, she checks in and connects with people and flashes that bright smile. Even without her glasses, she read the title “This Land is Your Land” on a guy’s ipad in the pit. Perfect timing as she brought him up on stage and sang that song to him.
In her best Tina Turner voice, Jones brought it slow, and then fast. As much as we all love to twerk, Jones brought us to 1964 for dances that are nice, clean and easy to do. She showed us how it was done by doing the Boogaloo, the Jerk, the Mash Potato (as she put some gravy at the end), Ride the Pony, the Twist, the Funky Four Quarters, the Wobble, the Swim, and the Camel Walk.
For the encore, the Dap-Kings brought fans up on stage to dance and let loose. Jones must have spotted fans holding vinyls in the pit earlier because she came back with a sharpie and signed them, all while singing and smiling.

Arriving that day from Tennesse, Valerie June wasted no time in warming up the crowd with her folk, blues, gospel, soul, country, Appalachian and bluegrass sound and sweet style. Her album Pushin’ Against a Stone, of which several songs are co-written with Dan Auerbach of The Black Keys and performances by Booker T. Jones arrives in May.
Hope your father is feeling better!