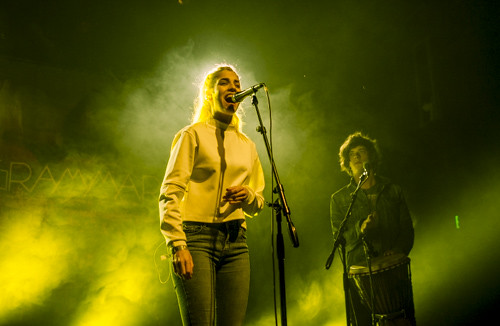 Photos and words by Ethan Shvartzman
London Grammar’s sold out show at the El Rey started on an unusual note. Prior to the trio’s appearance on stage, guitarist Dan Rothman came out to inform the audience that Hannah Reid, their lead singer, was experiencing some dental issues and had an abscess in her mouth. In spite of this, the band chose to go on with the show and play a shortened set.
Shortly thereafter, the band emerged on the darkened, smoke-filled stage and launched into “Hey Now” from their debut album If You Wait. Reid seemed to be in fine voice, and even paused between songs to jest with fans, clarifying that she had wisdom tooth issues but was powering through thanks to a Vicodin she took earlier. She said an abscess sounded gross and she didn’t want anyone to think she had a “dirty mouth.” She also shared that she was quite enjoying the Vicodin, and though there seemed to be 1,000 people in the crowd, if she squinted – she would see 2,000. Unfortunately the toothache prevailed, and after 8 songs which included a remixed upbeat version of “Wasting My Young Years” and the sing-along set-closer “Stronger,” the band left the stage. They returned to deliver a powerful version of “Metal and Dust” as their sole encore. While Reid should be commended for powering through the night, one can’t help but wonder at what could have been. Here is hoping she makes a speedy recovery and the band returns to LA to play a longer show. The appreciative crowd was certainly ready for it. 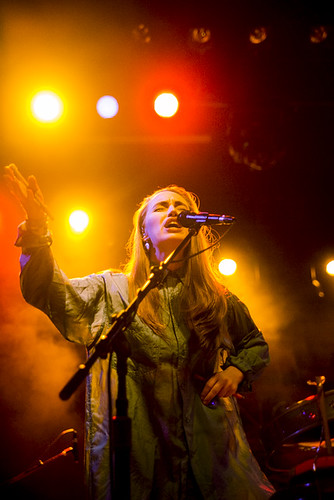 Norwegian quintet Highasakite kicked off the night, quickly winning over the early birds. Playing tracks off their soon-to-be-released album Silent Treatment, as well as the current In And Out Of Weeks EP, the band married keyboards with guitars, flugabone, and steel drum, delivering an upbeat set.

SHARON JONES AND THE DAP-KINGS...
THE NATIONAL @ THE SHRINE AUDI...