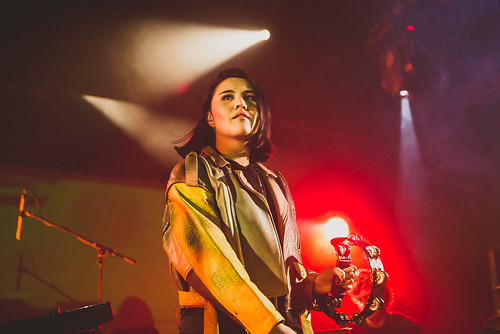 Photos and words by Debi Del Grande
Kan Wakan made their final February residency evening at the Echoplex a very very special one.
The venue was packed with fans waiting to hear the luscious and rich sounds that would soon overtake us. This is a band that will not be playing a free residency in the near future. Kan Wakan has gained quite a little following in LA and doesn’t even have an album out yet. The band was accompanied by a string ensemble and brought out special guest Moses Sumney for the final song – a stellar cover of Radiohead’s “Weird Fishes/Arpeggi.”
Speaking of the talented Moses Sumney, he has his own residency in March. The tall cool one showcased his vocal chops on a few songs preceding KW as a surprise guest. Although he was a bit under the weather, Sumney was a trooper for showing up and making us smile. Avi Zahner-Isenberg (Avi Buffalo) commanded the stage alone, taking a seat at the mic with his guitar and his soul on his sleeve. Who is Holy Folk? A question that most were asking before they opened the night. A collaboration of talented musicians that set the bar for the night.