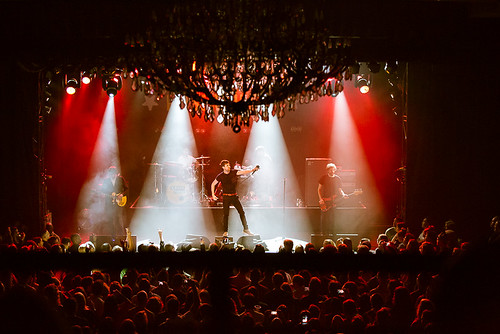 Photos and words by Debi Del Grande
“No one wants to hear the fucking new. Some of you do, but you don’t know the words. So you can’t sing along. So what’s the point in that? I’m not happy – you’re not happy – no one’s happy. So we’ve written a song with a chorus that hasn’t got any words so there’s no fucking excuse.” Lead singer Ricky Wilson knows us well. And with that, a new song called “Misery Company” enabled the sold out crowd at the El Rey to participate and sing. Many songs from Kaiser Chiefs’ new album Education, Education, Education & War which isn’t out until April 1st were played. We were thrilled to hear the old favorites and glad they didn’t save them for the encore as that is so predictable. Coming to LA with a new album is risky. Especially, if you haven’t played a gig here in some years. “I was worried you were all going to be against us. But you’re with us.” We were. And if you come back soon, we will be again.


Melodic Avid Dancer has been recently making the opener rounds. Jacob Dillan Summers’ vocals command attention. They have a couple of dates with PAPA next week at Constellation room (4th) and Casbah (5th).