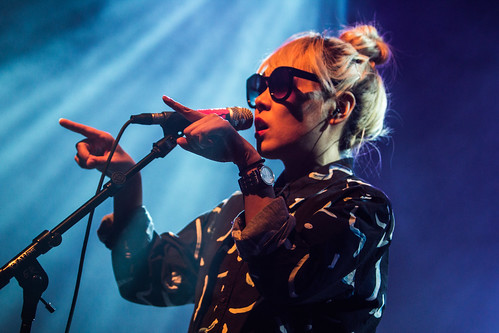 Photos and words by Leslie Kalohi
The mid-90s were alive and well at the El Rey as it welcomed the return of NYC-based Cibo Matto along with opener Scott and Rivers (Scott Murphy of Allister and River Cuomo of Weezer). The recently reunited, formerly food-obsessed duo celebrated a new album Hotel Valentine with a sold out show.
Starting off with just the two of them, the set was kicked off with classic, trip-hop songs from 1996’s Viva! La Woman like “Sugar Water” and “Beef Jerkey.” With an undeniable swagger, vocalist Miho Hatori radiated confident cool behind her dark sunglasses as Yuka Honda supplied the beats behind the keyboard. Fans cheered and grooved along in place, ecstatic to hear and see these songs performed live again. Soon after, the duo eased into newer material while also adding depth with help from guitar and drums. Check out our recent interview: cibo-matto-do-the-best 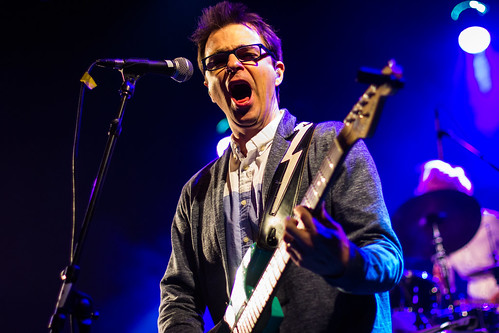 Opener Salt Cathedral set a chilled, dreamy mood with layers of reverbed vocals and synths. The airy stylings supplied by frontwoman Juliana Ronderos harkened back to Bjork’s glory days.
The addition of Scott and Rivers was a surprise to many, especially evident in the shocked, wide eyes as the curtain was drawn to reveal Weezer’s frontman on stage. Singing bouncy, pop-rock only in Japanese, Murphy and Cuomo barreled through an impressively energetic set that also included a rendition of Weezer’s iconic “Buddy Holly.”