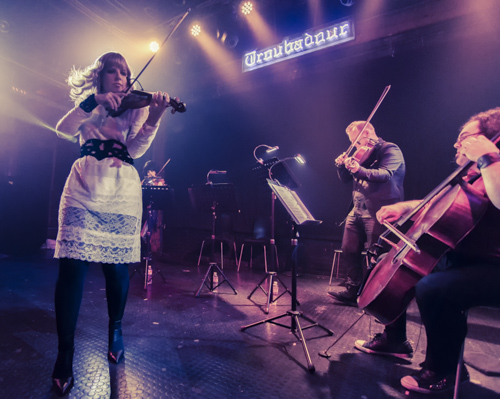 Photos and words by Ethan Shvartzman
Classical string instrumentation with a sizzling twist. No one fell asleep at the Troubadour as The Vitamin String Quartet played many favorites and rocked the house. Comprised of a rotating collective of top classical musicians, VSQ covered everyone from the Foo Fighters to Aerosmith to Led Zeppelin to Macklemore. An early set highlight that brought a round of cheers was a rambunctious cover of Adele’s “Rolling in the Deep,” which saw the players leave their podiums for the first (but definitely not the last) time during the night. Playing Queen’s “Bohemian Rhapsody,” VSQ encouraged the crowd to sing along. And rather than a kitschy Wayne’s World moment, some incredibly talented vocalists in the crowd helped it stay classy. Attempting to end the set with lengthy jam version of Muse’s “Knights of Cydonia,” the crowd wanted more. Admitting to not having prepared an encore, VSQ took suggestions and decided upon The Neighbourhood’s “Sweater Weather,” ending the night on a gorgeous note.