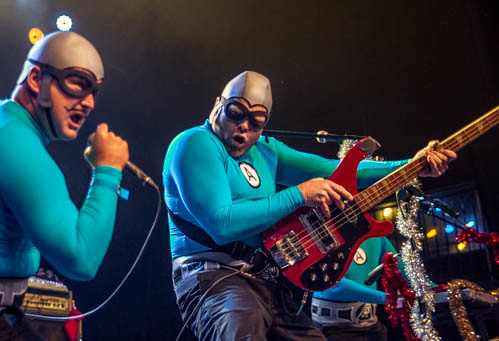 Photos and words by Ethan Shvartzman
Cheesy Christmas decorations, numerous costume changes, a giant crustacean and a slithering snake, fun projections, and oh yes, good old fashioned punk and ska.
The band of superheroes lead by Christian Jacobs (aka The MC Bat Commander) delivered a high-energy, light hearted show that was full of holiday spirit without ever getting too saccharine. The audience ranged in ages of 6 months old to 77, all transfixed on the stage as The Aquabats played upbeat tunes from their entire back catalog. Clearly influenced by the success of their TV show, the band kept it family friendly, trading in the obscure adult humor of their past for jokes with universal appeal. It was hard not to smile, as MC Bat Commander did everything in his powers to connect with the diverse audience, alternating between kid-friendly gimmicks and more punkish pranks.
The most memorable prank of the night consisted of Jacob’s soliciting snacks from the audience and receiving (to his surprise) a bag of cookies, a granola bar and a Clif bar. The cookies were disbursed back into the crowd while the band played “Danced the Night Away” by Van Halen, altering the lyrics to “snack the night away.” The Clif bar, however, was first licked by the entire band before being thrown back. One lucky audience member caught the special treat with chants of “Eat it! Eat it!” Hope you had your shots.


While The Aquabats came with water and cookies, Kepi Ghoulie had even better treats in store for the crowd covering them with balloons and continuously tossing Christmas gifts into the crowd. Keeping up with the high energy level of the night, the band was joined on stage by Eagle “Bones” Falconhawk of the Aquabats, since Kepi Ghoulie’s bassist was snowed in on the I-5.

Kicking off the show into high gear was Emily’s Army. Their second album Lost at 17, released this year, was produced by Billie Joe Armstrong of Green Day, and his influence on the band was evident. Their sound was both classic and fresh at the same time. Emily’s Army wasted no time delivering a slew of pop punk tunes, tinged with California surf all while manically bouncing around the stage. The audience ate it all up, nearly instantaneously breaking out into a mosh pit full of smiling faces.