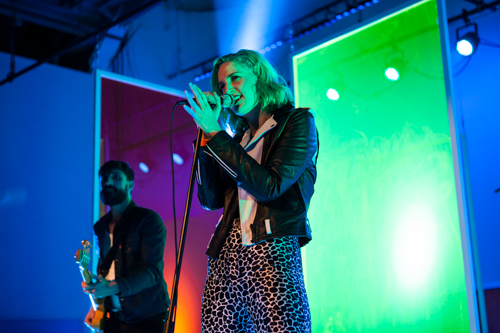 Photos and words by James Lozeau
If you were in Silverlake Friday night, you may have caught MS MR playing for the second installment of the FORD Artist Connect Series, presented by Pitchfork. The room is a warehouse turned into a bar-type vibe. The band glided onto the stage and started into their single “Bones.” Early on through the first few songs, there was some sound issues, but everything was on track by the time they played their third song “Salty.” Singer Lizzy Plapinger took off her jacket and started to get into the show. Swaying seductively in a dominant and strong pose onstage, she stared onto the crowd. Those in attendance were into the music and as I moved around the room, heard a girl telling her friend “I love this song. I love the way her voice sounds.” During “Dark Doo Wop,” Lizzy was belting out the soulful lyrics as her bandmate and co-founder of the group Max Hershenow danced around her onstage. They closed with a rousing version of “Hurricane,” thanked the crowd and left the stage as they called it a night.