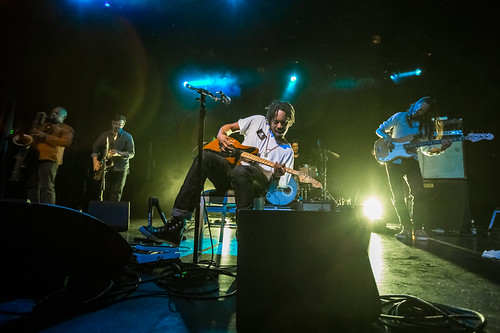 It was a spectacular night of music at The El Rey Theatre, led by the blues/soul sounds of Austin’s Black Joe Lewis.
Singer/guitarist Joe Lewis and crew kept the crowd dancing and grooving throughout the night with some explosive guitar-play, a bit of sass lyrically and a double-dose of saxophone that elevated their sound to a whole new level. On vocals, Lewis adds a little rasp and a lot of soul reminiscent of the late, great James Brown.
Hobbled with what appeared to be a leg injury, Lewis spent his time sitting down on a chair at the front of the stage, but in no way did that inhibit his performance. While he did manage to get up and jam during one song toward the end of the set, he wisely sat back down to take the strain off his leg. 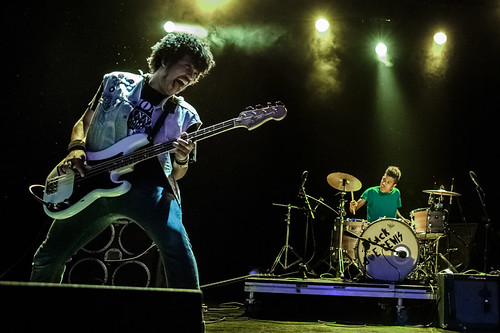 It’s just a matter of time before the two openers headline their own tours. Radkey, a punk/garage rock band out of St. Joseph, Mo., is comprised of the three Radkey brothers and a whole lot of energy and attitude. “Hi. We’re Radkey and we’re here to make you give a fuck,” said singer/bassist Isaiah before kicking off the set. Both he and his older brother/guitarist Dee took full advantage of the space on stage to jump around and strike some stellar rock poses, including a few splits and sweet flips of his dreadlocks from Dee. At the end of their set, one person in the crowd shouted: “I give a fuck!” Mission accomplished. 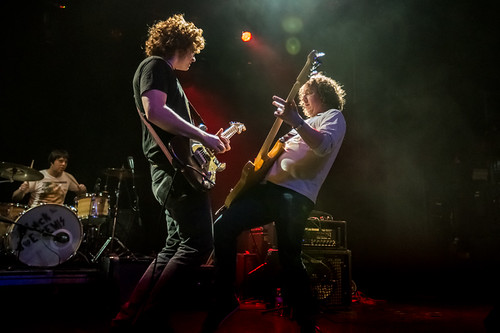 Photos and words by Scott Sheff
Think No Think out of Austin is certainly another band to keep an eye on. Led by the curly-haired singer/songwriter/guitarist John Dowey, Think No Think delivers an uplifting sound of blues/rock filled with plenty of fuzzy guitar and exhibits their youthful energy on stage when jamming out. This band has a crazy amount of talent and without a doubt won over many new fans. This was the first time both Radkey and Think No Think played in Los Angeles, but let’s hope it’s the first of many more to come.