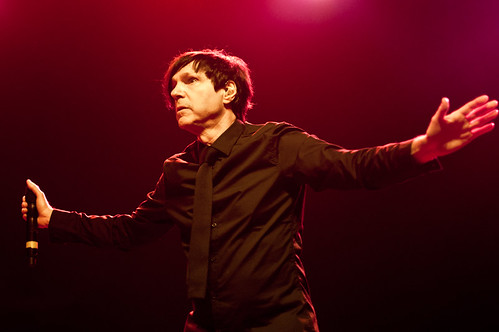 Photos and words by Melissa Moore
Sparks filled The Fonda Theatre with circus music and fans for the final show of The Revenge of the Two Hands (Ron Mael on keyboards) One Mouth (Russel Mael on vocals) Tour before heading to Europe. A spare stage allowed the brothers to showcase a handful of songs from their 2009 album The Seduction of Ingmar Bergman, with a few hits off earlier works rounding out the energetic and whimsical set. Like their shows earlier this year, the songs were stripped down and often rearranged to make the best of the voice and piano. It’s hard to believe that some of these songs were written 40 years ago, given how powerful and fresh they still feel. Fans will be happy to know that it looks like the movie version of Bergmanis finally a go, as revealed by the Maels on Monday night.


Set List:
Your Call’s Very Important to Us. Please Hold.
How Do I Get to Carnegie Hall?
B.C.
Here in Heaven
Academy Award Performance
Those Mysteries
Good Morning
Falling in Love With Myself Again
Big Boy
What Would Katherine Hepburn Say
I Am Ingmar Bergman
The Studio Commissary
Limo Driver (Welcome to Hollywood)
Oh My God
Nicotina
Popularity
This Town Ain’t Big Enough for Both of Us
(When I Kiss You) I Hear Charlie Parker Playing
Suburban Homeboy
When Do I Get to Sing “My Way”
Encore:
Tryouts for the Human Race
The Number One Song in Heaven
Revenge Of Two Hands One Mouth
MINOR ALPS + DAN WILSON + FREE...
OF MONTREAL @ THE ECHOPLEX