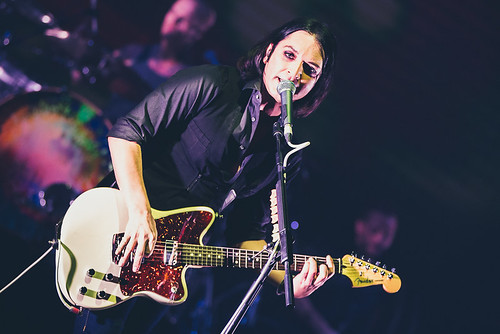 Photos and words by Debi Del Grande
With a triumphant return to the US after six long years, Placebo had diehard fans lining up in the wee hours at The Wiltern to get close to the UK group and hear songs from their new album Loud Like Love and many others. As the lobby started to fill up, most were donning their best black attire and perfect eyeliner and the excitement couldn’t be contained. Personally, this was my first time to hear them live and the day went by too slow until doors finally opened.
The second the note from “B3” was played, Brian Molko’s unique and gets-inside-your-veins’ voice sent shivers down my spine. With several guitar changes, Molko played his heart out with bassist/keyboardist and original member Stefan Olsdal by his side. Although drummer Steve Forrest may not be an original member, the guy is a beast on the drums and quite a presence. The band wasn’t alone on stage. Bill Lloyd (bass guitar/keyboards/piano), Fiona Brice (violin/keyboards/theremin/percussion/backing vocals (hello, “Running up that Hill”)) and Nick Gavrilovic (guitar/lap steel guitar/keyboards, backing vox) were major contributors to make this show something to crave until they return for a full tour.
Fans in the balcony were on their feet dancing, holding signs and waving. There were many highlights, but once “Meds” started, fans erupted into a frenzy and didn’t stop until the the band left the stage. The setlist might have left a few wondering what happened to some older songs, but like with most bands with a large catalog and a new album, it was a solid balance of emotion.