GEOGRAPHER @ THE GETTY MUSEUM’S SATURDAYS OFF THE 405 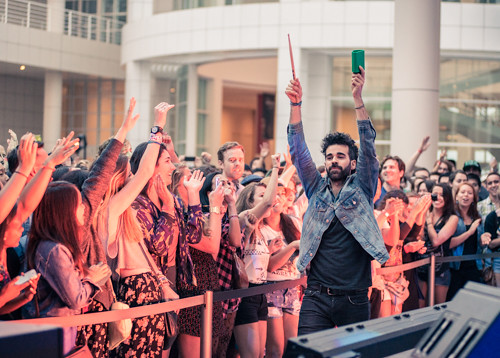 Photos and words by Ethan Shvartzman
Some pairings are perfect – Geographer and The Getty Museum turned out to be one of them. The Bay-area trio played a diverse set to what started as a crowd of adoring fans, but grew to encompass museum attendees who were attracted to the sound emanating from the outdoor stage. The band is a little atypical in that rather than a bass, a cello is responsible for low-end of most songs, which adds a unique twist and sets their sound apart. The set was primarily culled from the bands two recent releases Animal Shapes and Myth and included fan-favorites such as “Kites,” “Paris,” “Verona” and “Lover’s Game,” which saw frontman, Mike Deni, hoping off stage down to the crowd. The encore saw the band dig deeper into the their catalogue, bringing out “Can’t You Wait” from the band’s first album, Innocent Ghosts. Throughout the night, the air felt electric and the band’s connection palpable as each song was met with applause. Geographer will play LA next November 5th at the Echoplex.