OBLIVIANS + THE INTELLIGENCE + FUZZ + THE LAMPS + HAUSU + FF @ THE ECHO/ECHOPLEX 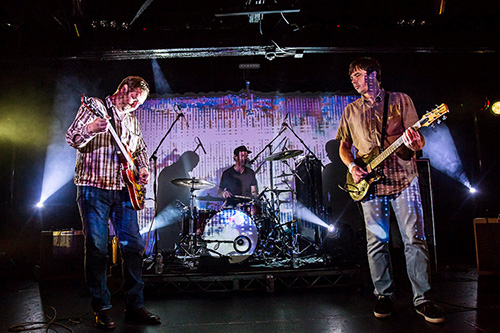 Photos and words by Oliver Walker
Two floors of guitar shredding mayhem, wild hair and wilder licks was the order of the evening for Murica Fest, presented by Blundertown at The Echo/Echoplex. It was an evening that mixed titans of garage rock past with current rising stars of the genre as the fest brought forth both the return of The Oblivians and the prolific Ty Segall’s worst kept secret union with frequent guitarist Charlie Moothart – Fuzz. FF unleashed some jangly, yet fast-paced rock upstairs while Hausu released a sonic wave that ping-ponged from wild screaming to precise and technical in the Echoplex below. While The Lamps presented a very precise form of aggression with the worlds angriest drummer and a monstrous board of pedals, Fuzz kept things light-hearted as they careened through their set complete with Segall drum solos and distorted screams processed through a guitar amp. Like their name suggests, The Intelligence was precise in their destruction, waiting until their final song to start throwing guitars and climbing the drum kit before the kings of the Memphis garage Oblivians stormed the stage. What followed was a ferocious performance that defied their decade long nap as they served up cuts fresh and frozen in a thirteen song performance that left fans old and new leaving satisfied without blowing out too many amps along the way.