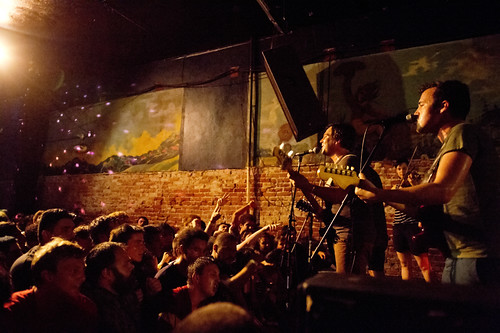 Photos and words by Sam Saturday
“It’s really cool that The Smell installed their new heaters,” Moses Campbell’s Sean Soloman jested as bodies filled the tiny space from wall to wall, dripping with sweat. Even the brick walls seemed to be sweating around the packed crowd. The killer lineup showcased some of the best up and coming punk acts from LA along with DIY punk forerunners Defiance, Ohio.
Having been around for eleven years, it’s awesome to see that bands like Defiance, Ohio are keeping committed to their scene, ideas, and beliefs. Even though they reside clear across the country, the feeling of community the band brought to The Smell was palpable. Fans stood shoulder-to-shoulder and immediately erupted as the band belted out “Oh, Susquehanna!” 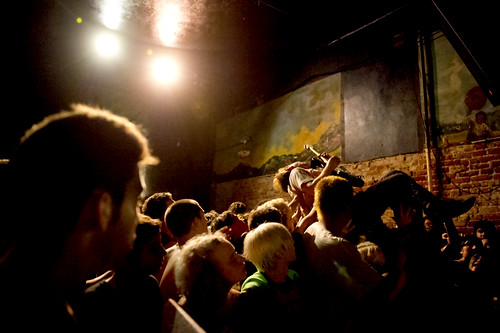 Moses Campbell have arguably spearheaded the current DIY music scene that is thriving in LA. Not only do they have a magnetizing presence on stage, they also have the chops to back it up. Their performance at The Smell was no exception as the quintet rolled through the sweatiest and rowdiest set of the night.

First act Huxley Anne kicked off the night by playing on the floor and drew quite an early and enthusiastic crowd. The young trio exhibited an undeniable pop charm with surf punk undertones.
Last minute addition of all-female trio The Courtneys from Vancouver, BC was a sweet surprise. The ladies tag themselves as “slacker pop,” but they did anything but slack and had the crowd bobbing on their toes. Their full length self-titled album of perfect-for-summer jams just dropped at the beginning of June.
Orange County’s Palm Reader were the third trio of the night, yet unique from all the rest. Featuring big guitars and Byron Scott Adams’ outstanding vocals the band helped tie the whole show together.