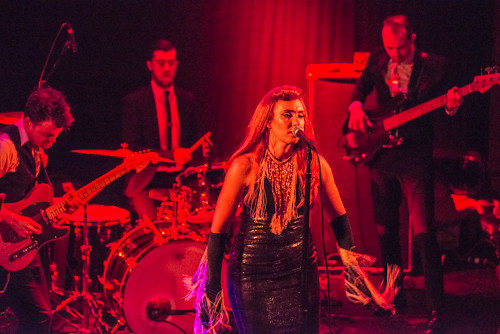 Photos and words by Ethan Shvartzman
Clairy Browne delivered 110% pure diva at the Troubadour transporting us to a smokey nightclub somewhere circa 1960. The entire band gave us a show full of sultry ballads and clap-a-long jams. The new single “Love Letter” was a highlight as was the killer encores with great sax solos by Darcy McNulty. Personally, Browne won me over with medley of “The Boy Is Mine / She Plays Up to You” which momentarily broke the 60s spell with a 90s guilty pleasure.

Pony Boy was America(na) personified as she played a string of country-tinged rock numbers, including Even Cowgirls get the Blues and a set closing cover of Bob Dylan’s Isis.

Opener Sweetwater + the Satisfaction kicked off the night with in high gear with an extremely up-beat set of great numbers including a cover of “Valerie.”