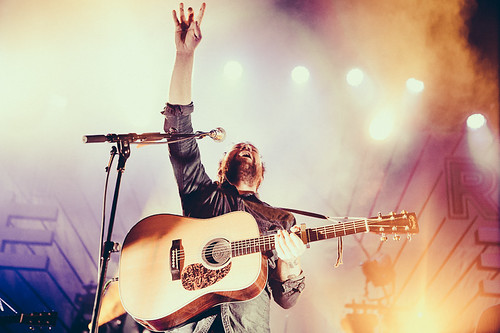 Photos and words by Debi Del Grande
“Scotland keeps me miserable and that’s why I like it.” Scott Hutchison (lead vocalist, rhythm guitarist and lyricist) expressed to the sold out crowd at The Fonda. Creating songs like Frightened Rabbit would be a little difficult living in sunny Los Angeles. The last time I saw them was at the same venue. Embarrassing as this may sound, the season finale of “Lost” was on. Hutchison remembered this strange circumstance, and thankfully fans weren’t sitting home watching t.v. this time around. New songs from the latest Pedestrian Verse were well-received. Luckily, the quintet will be back again. I hope it rains. 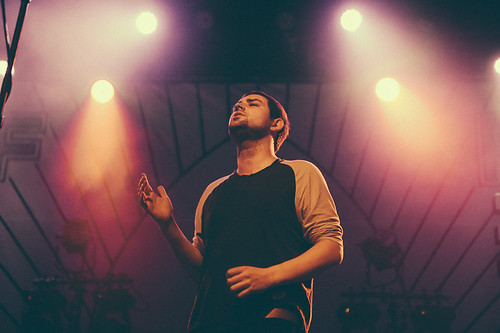 Fellow Scots and mates with FR, The Twilight Sad, opened and this is a band I was excited to see again after catching them at The Echo last year. As vocalist James Graham told the crowd, they are usually a five-piece, noisy band, but TS was giving us the “coffee shop version,” with jazz and shit. Even Andy MacFarlane (guitar) was sitting down! Graham never vanillas his accent down, which is refreshing and at times, gut-wrenching. Completely absorbed, he will step away from the mic and continue to sing. I have No One Can Ever Know on constant rotation.

Setlist for Frightened Rabbit:
Holy
The Modern Leper
Old Old Fashioned
Late March, Death March
Nothing Like You
Backyard Skulls
Head Rolls Off
The Oil Slick
My Backwards Walk
State Hospital
Poke
Good Arms vs. Bad Arms
Swim Until You Can’t See Land
Acts of Man
Encore:
The Woodpile
The Twist
Living in Colour
The Loneliness And The Scream
THE BLACK RYDER @THE ECHO
CHVRCHES + MØ @THE ECHO