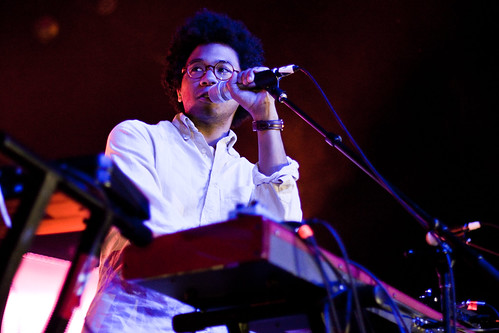 Photos and words by Leslie Kalohi
The sold out crowd packed in tightly against the barrier of the Fonda Theatre, so much so that security began handing out bottles of water to those dedicated fans ready to groove to the sounds of Toro y Moi. Performing under said moniker, producer Chazwick Bradley Bundick creates hook-filled synth beats that are perfect to dance along with as well as chill out to. This is aptly demonstrated by the positive euphoric response to the single “So Many Details” off his latest album, Anything in Return.
Starting the night off were the funky sounds of both Atlanta’s Dog Bite and Brooklyn’s Sinkane.