SONG FOR ECHO PARK: A FILM WITHIN A FILM @ THE CHURCH OF FUN 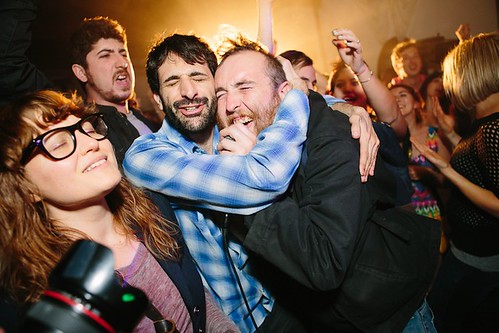 Photos and words by Brittany Kalaj Margulieux
Judson McKinney hosted a screening of his new short film Song for Echo Park at the Church of Fun, a self-proclaimed “bohemian commune” in East Hollywood amidst an impressive musical lineup. I was a bit trepidatious about attending this “unique art showcase.” It seemed interesting, but there was little online about the Church of Fun. Eventually, I scrounged up a Facebook event with an address and explicit instructions to arrive at 8 p.m. because dinner would be served and the show would begin soon after. (8 p.m.? That’s a little early for a Saturday…)
At 8, the place was nearly empty and I was beginning to fear I had been duped into photographing just another houseparty. I was wrong. After a few Tecates and eventually tacos (they really did serve dinner, thanks Nathan!), the party was warmed up by DJ Koreatown Oddity. His mask is frightening, but I was far from afraid of his beats.

Then the stage performances began. BOOM. Simone White, fresh off her Euro-tour, George Glass, Tall Tales and the Silver Lining, Dead Ships, Joey Siara (Henry Clay People), Judson McKinney, himself, The Aquadolls, The Janks, Fort King (Insert crazy guy who stormed the stage and lectured the audience, here.), Borts Minorts, and Jose Promis. All culminating to a showing of McKinney’s new short film and a blow out performance by Manhattan Murder Mystery. Everyone got two songs. Almost everyone followed the rules. I was waterboarded with local talent. The crowd was huge and loud and cramped and sweaty, and the energy just bounced from staged to crowd stage to crowd in such a frenzy that it finally just fucking imploded and it was all over. The
Church of Fun is aptly named.