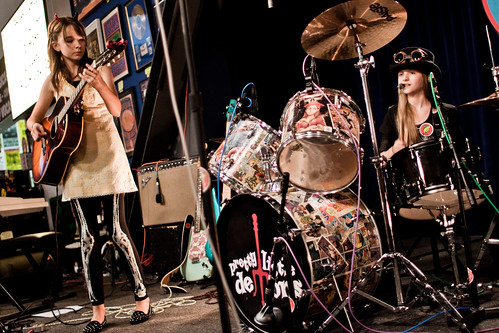 The cool demeanor of Lydia Night and the effervescent nature of Marlhy Murphy make up the rock duo known as Pretty Little Demons. Although the pre-teens have only been playing together as PLD since last August, the members have been honing their craft for years. The two-piece is gaining buzz as the youngest group asked to perform at the SXSW Music Festival coming up later this month.
Fans of all ages and sizes showed up in full-force at Amoeba Music to catch the girls before they head to their showcases in Austin. Trading off between lead vocals, the harmonies of Night and Murphy proved to have enough bite for older fans, while retaining a fun “bop” to keep the little ones engaged as well.
Fellow fans/mentors Brett Anderson (Donna A. of The Donnas) and Exene Cervenka (of X) joined in for a couple of songs. The band left the crowd with a cover of Hole’s “Violet” before leaving the stage. Next stop is Texas, then the world.