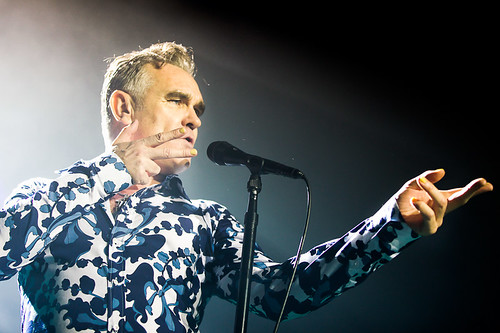 Photos and words by Debi Del Grande
For quite a few of us, high school was tough. We didn’t fit in, were lonely, misfits, looked different, acted different, and relationships were torture. High school can be emotionally brutal. And when down and confused, turning to music can help you get through some tough times. Enter Morrissey and The Smiths.
It was more than a pleasant surprise that Morrissey decided to sing at Hollywood High School the night after the big Staples Center show. Several fans even attended the school (and probably still are), located on Highland Avenue and Sunset Boulevard. They probably experienced the drama of those growing years and found the lyrics to The Smiths’ and Morrissey’s music therapeutic. Someone got them. Someone understood what they were going through. The devout fans that stood in a line that stretched around the block knew they were in for a special treat.
All tickets were will call only, so it took some time to get everyone inside. As Kristeen Young opened, it was barely full as organizers were trying to get fans in as soon as possible. Luckily, everyone got in just in time as Russell Brand came out to introduce Morrissey. Russell Brand is known for being a huge fan of Morrissey. He also named his cat after him.
Personally, I was curious about how Morrissey would sound after his battle with a bleeding ulcer and Barrett’s esophagus, rather than if there was food or not at the show. Would that voice be damaged? I heard reports his voice was beautiful in San Diego and Staples, but I had to hear for myself. Well, when the moment finally came and the man stepped out on stage with his bandmates and he held the mic, that distinct voice filled the high school auditorium as his adoring fans screamed and reached out to him. Opening with the appropriate “Alma Matters,” Morrissey’s voice was so pitch perfect, I had to really look close to see if he was lip-synching. Of course, he wasn’t. But that’s how solid it was.
‘So : the choice I have made
May seem strange to you
But who asked you, anyway?
It’s my life to wreck
My own way’
The man with the baby blues changed his shirt four times. Two of which were thrown out to the hungry crowd. And they are always nice shirts! Morrissey constantly reached out and touched the hands of fans and also handed the mic to a few. One said “You’ve saved me from so many hard times.”
One powerful song included The Smiths’ “Meat is Murder” accompanied by a brutal, honest and deeply sad film of animals being slaughtered for human consumption. Towards the end of the song, Morrissey turned towards the screen and knelt with his head down.
‘This beautiful creature must die. A death for no reason.’
Towards the end, each band member introduced themselves, but when Boz Boorer (co-writer/guitarist and musical director) came to the mic, he received deafening applause.
As tradition, the encore brought determined fans to try to touch Morrissey and get on stage. A few made it, but it was nine year old Devin who stole everyone’s hearts as he made it to the stage and Moz held his hand and continued singing “A Boy With The Thorn In His Side” and then picked him up. What a memory for Devin.
It truly felt like a special show in appreciation for the fans.
“I’d like to think in the future wherever it takes me – I can still hold my head up – in the psychiatric unit or wherever I may be – please remember I love you. I love you.”


Setlist:
Alma Matters
Ouija board, Ouija Board
Irish Blood, English Heart
You Have Killed Me
November Spawned a Monster
Maladjusted
You’re The One for Me, Fatty
Still III (The Smiths)
People Are The Same Everywhere
Speedway
Asleep (The Smiths, a capella)
That Joke Isnt’ Funny Anymore (The Smiths)
Meat is Murder (The Smiths)
Please, Please, Please Let Me Get What I Want (The Smiths)
To Give (The Reason I Live) (Frankie Valli cover)
Everyday Is Like Sunday
I’m Throwing My Arms Around Paris
Action is My Middle Name
Let Me Kiss You
Encore:
The Boy With The Thorn In Hide Side (The Smiths)
KISHI BASHI + TALL TALL TREES ...
SURFER BLOOD + GRAND RAPIDS @ ...