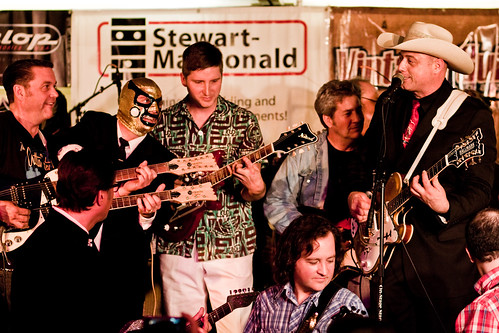 Photos and words by Leslie Kalohi
The Celebrity Ballroom at the Anaheim Plaza Hotel was brimming with people early on for the final night of Deke Dickerson’s Guitar Geek Festival weekend. As the time to the end drew closer, the joy and camaraderie was always present, no doubt bolstered by the positive energy of organizer Dickerson. This would be the last time the festival would be held in its current form. But as Dickerson himself said several times on stage, he would finally be able to rest after putting together this labor of love for ten years.
The last invited guests of the night, and for the Guitar Geek Festival, were Deke Dickerson’s favorite party band, Los Straitjackets. Led by Daddy-O Grande speaking purposely rudimentary Spanish, the surf-rock group blended traditional tunes with a modern, wacky twist , all while donning suits and Mexican-wrestling masks. Los Straitjackets proved to be a pleasing, fitting act, as the band let loose during the final song of the set, a rousing interpretation of Benny Goodman’s “Sing, Sing, Sing.”
The festival closed with an open invitation to all “guitar geeks” to come up on stage with their gear, plug in, and play along to a few songs of Deke Dickerson’s choosing. Chuck Berry’s “Johnny B. Goode” was the first selection, followed briefly by the chance for all to play the opening riff to Deep Purple’s “Smoke on the Water.” The Guitar Geek Festival ended with everyone jamming to a slightly revamped version of Them’s “Gloria,” re-written by Dickerson as “Geeks.”
Los Straitjackets and End of Festival Monster Jam: