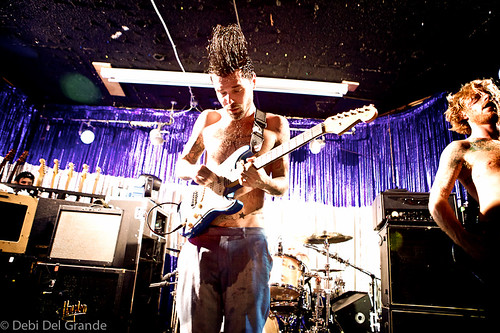 Photos and words by Debi Del Grande
With a few fresh tats and some brand new tunes, Scottish rockers Biffy Clyro performed a promo gig for their upcoming Opposites for the lucky few who scored a ticket at The Satellite. Fans were given a free t-shirt and an in-your-face early rock show. Last time I caught the guys was at The Troubadour in March of 2011. The crowd was mostly compromised of Europeans that knew very well who these rockers were. And while the guys are used to selling out arenas in Europe, most Americans have yet to taste the sweat of Simon Neil (lead vox/guitar) and feel the love from brothers James Johnston (bass/vox) and Ben Johnston (drums/vox) and chant “Mon the Biff!” Hoping a Coachella appearance will happen.


Setlist:
Stingin’ Belle
The Captain
A Whole Child Ago
Modern Magic Formula
Folding Stars
Victory Over The Sun
God & Satan
Who’s Got A Match?
The Joke’s On Us
Bubbles
Black Chandelier
Liberate The Illiterate
Booooom Blast & Ruin
Sounds Like Balloons
Many of Horror
That Golden Rule
DEATH GRIPS @ THE ECHOPLEX
POLYPHONIC SPREE @THE FONDA TH...