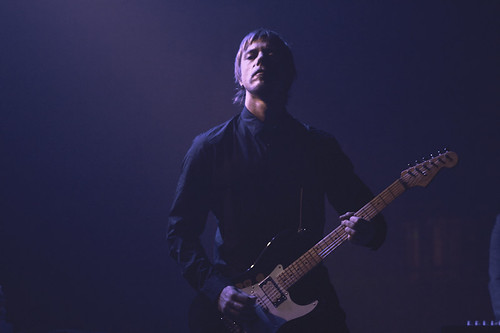 Photos and words by Debi Del Grande
With the hazy upper back lights dropping behind Paul Banks and his band, the Fonda was the perfect venue to perform his recent music from Banks after FYF. Banks has definitely fine-tuned his craft outside of Interpol and his alias Julian Plenti, with many tunes in the set from Julian Plenti is… Skyscraper, which have much more convinction and drive this time around. Bringing the sound full force, were Brandon Curtis (touring member of Interpol, Secret Machines on keyboards, bass and vocals), guitarist Damien Paris and drummer Charles Burst.
Electric Flower Group kicked things off. EFG consists of another Secret Machines member (drummer Josh Garza) along with guitarist/vocalist Imaad Wasif. I caught them at The Echoplex and hope to hear them again soon.
In the few times I’ve seen The Neighbourhood, this was a much calmer, tighter show, and it fits them well.


Setlist:
Skyscraper
Fun That We Have
I’ll Sue You
Only If You Run
Young Again
Fly As You Might
No Chance Survival
Arise, Awake
Over My Shoulder
Lisbon
No Mistakes
The Base
Summertime Is Coming
Paid For That
Encore:
On The Esplanade
Games For Days
POLYPHONIC SPREE @THE FONDA TH...
HOT SNAKES + THE NIGHT MARCHER...