A PLACE TO BURY STRANGERS @THE TROUBADOUR 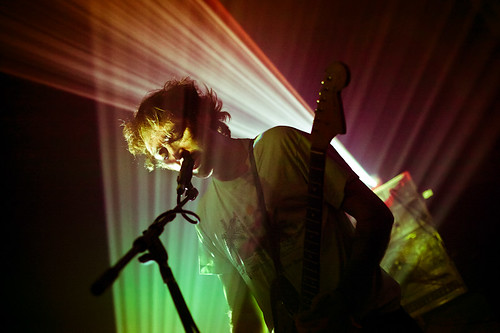 Photos and words by Debi Del Grande
Although I knew my camera would be crying because of the very low light that usually accompanies A Place to Bury Strangers’ shows, it wasn’t going to stop me from experiencing one of my favorite escapes that a band can give. Having followed them since 2008 opening up for Dandy Warhols, the show at The Troubadour this week was by far the tightest I’ve heard yet. As new drummer Robi Gonzalez sold me their latest album Worship at the merch table before showtime, Obama was elected President and it was time to celebrate.
With APTBS, you can completely zone out and go along for the ride. A very very loud ride, but with smooth twists and turns as the band pours shoegaze/space rock all over you. While Oliver Ackermann mastered his wall of sound and breathy vocals, bassist Dion Lunadon broke the wall between the band and the crowd by coming down in the middle of the crowd for the encore hit “Ocean.”
As much as my ears were ringing as I got in my car, I popped the CD in and blasted it all the way home. Just didn’t want to get off the ride.