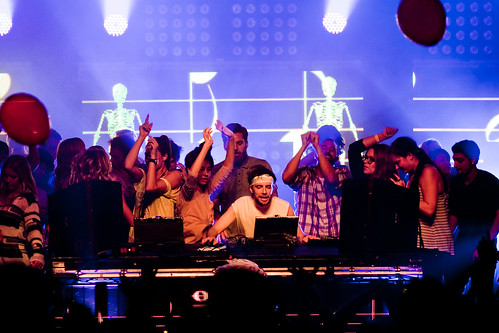 One might have believed a New Year’s Eve celebration was happening, what with all the balloons, confetti, and streams of toilet paper showering over the dancing, glow necklace-wearing masses. But no, it was just a Thursday night at OC’s The Observatory as it played host to mash-up artist Girl Talk (aka Gregg Michael Gillis).
Real female power started the evening festivities. First up was Nashville-based Five Knives, fronted by the sassy Anna Worstell. The band aggressively combined rock and electronic beats, proving that a southern twang shouldn’t automatically be assumed from Tennessee musicians.
Next on stage was Dev, accompanied by back-up singers and a DJ. Her radio popularity with songs like “Bass Down Low” and “In the Dark” helped win over a hungry crowd ready to dance and party. “I know you know this one, so sing along!” commanded the pop singer/songwriter when she went into “Booty Bounce,” famously sampled by Far East Movement for the hit, “Like a G6.” Throwing in her take on AWOLNATION’S “Sail” only energized the already excited audience.
Complete with lights and video monitor displays, the Girl Talk show experience has grown by leaps and bounds. Dancing fans surrounded Gillis the entire night as he frenetically bounced behind his laptop. All decades and genres were fair game, and throughout the night snippets of Beck and The Strokes would play alongside Kelly Clarkson and Lady Gaga. The music was continuous and never lingered on one song for too long before Gillis plowed into something completely different. Although a Thursday night, everyone partied like the weekend was already in full swing.
Photos/Words by Leslie Kalohi.