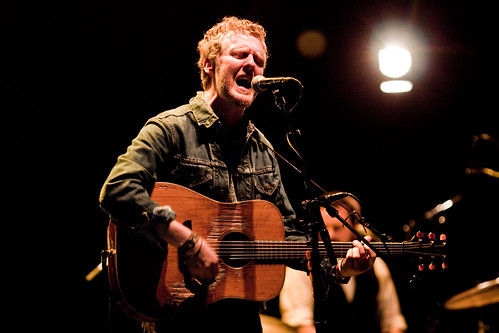 The ever-charismatic Glen Hansard began his U.S. tour to promote Rhythm and Repose at The Wiltern Theatre this past Wednesday evening. The concert started off with selections from Hansard’s latest solo effort, beginning with him on keyboards on “The Storm, It’s Coming” before taking front stage and center with “You Will Become.” His extensive work as frontman for The Frames and The Swell Season was not ignored and comprised a large part of the evening’s setlist. Hansard likes to share the spotlight and came prepared with a full backing band complete with horns and strings helped provide accompaniment when needed. Javier Mas (Leonard Cohen’s touring guitarist) shined.

The concert was a celebration, with Hansard often encouraging the audience to sing along or sharing humorous tales of life on the road. As he and the band were in LA for a few appearances leading up to the show, Hansard spoke of being in awe of Lisa Hannigan and Joe Henry’s performances the night before at the El Rey Theatre. He was so impressed that he asked them to recreate their encore as his own encore at the Wiltern, which was a tribute to The Band’s Levon Helm, who passed away this past April.

Before finally closing his first show of the tour, he decided to leave the audience with one final melody for everyone to take with them, a “lulllaby” in the form of “The Auld Triangle.” Photos by Leslie Kalohi.