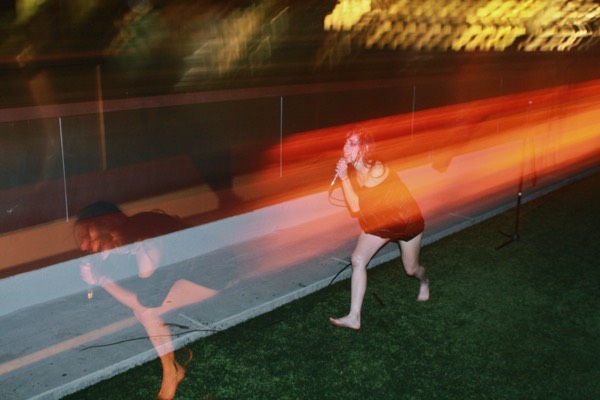 L.A. RECORD had the pleasure of co-presenting experimental performance party The Series this month on The Standard, Downtown LA’s rooftop. Observe Tearist and Julia Holter make their way around the place, see some sign language in the elevator, listen to a can transmitting a message, marvel at Air (Ariana Natale) lighting a dancer on fire with a box possessing magical powers, and wash it down with Jason Grier by the pool. There was also sound action in the pods courtesy of Morgan Gee and Dylan Mackenzie, and a poem everyone could take home about lonely goats by Mandy Kahn. Tearist’s Yasmine Kittles was heckled and tried to throw a blonde guy in the pool. No one could tell whether it was a joke or not—as it was the nature of the event for the line to be blurred between actual and staged—but she says this was for real. Jerk! Julia Holter also performed phonetic translations of Youtubes projected on a wall. Check out video of Holter and Tearist that we shot, here. Photos by Daiana Feuer

Note! there are three “pages” of photos. So after scrolling through the first batch, be sure to click pages 2 and 3.