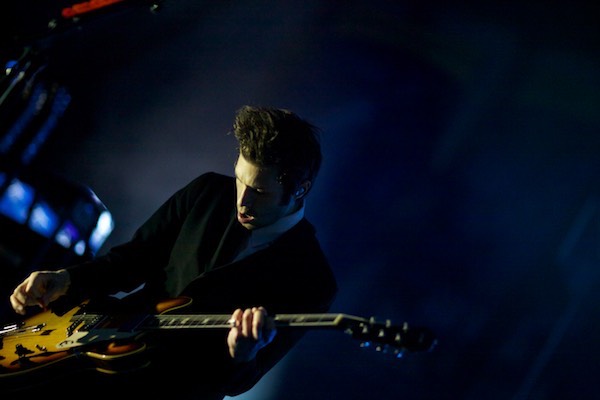 Performing a couple nights around So. Cal. before hitting the Coachella stage this year, Interpol played just a short drive up the beautiful coast at UCSB. Hey, it’s not every night you go to see a band in a gym.  But these guys can pull it off.  With an ever-changing setlist, we were treated to the the spine-tingling transition on “The New,”  crowd fav “Evil,” and the solid “Lights” from their self-titled album, which is best live and LOUD.  Santa Barbara resident Martin Gore himself was at the show.

Set list: Success / C’mere / The Heinrich Maneuver / Summer Well / Taken You On A Cruise / Stella Was A Diver And She Was Always Down / Rest My Chemistry / Evil / The New / Mammoth / Lights / Say Hello To The Angels / NYC / Memory Serves / Slow Hands.  Encore: The Lighthouse / Barricade / Narc / Not Even Jail

Now a duo with a touring drummer, opener School of Seven Bells (SVIIB) are stronger than ever.  The energy and interaction between Benjamin Curtis (who is now at the front of the stage) and Alejandra Deheza invites the crowd into their dreamy world with tunes from Disconnect From Desire.