It can now be told: this month’s Rrose in a Prose: MAH! literary salon will now feature writer/director/actress/singer/artist/L.A. RECORD editor Drew Denny! That’s today, folks, for those keeping tabs on that whole “time” thing.

It’s been a busy year/life for Drew, what with her feature film playing festivals everywhere and her band Bon Bon touring to SXSW. And yet she still has time to come back and grace her old L.A. RECORD friends with her presence at this month’s Rrose in a Prose literary salon, despite the fact that, technically, she now lives in New York City. 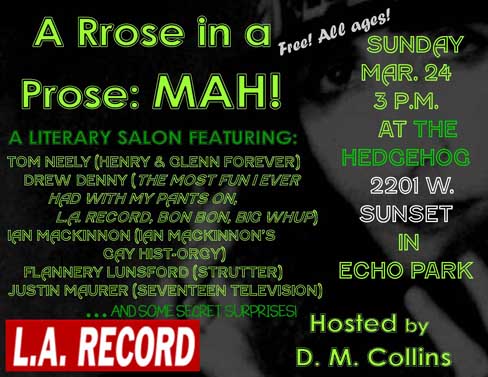 In addition, though director Allison Anders has had to cancel her appearance due to some health concerns, Flannery Lunsford, the star of her new film Strutter, will be on hand to read some of his own material. Actually, there’s a whole list of talented authors, poets, and performers who will be there today:

That’s at the Hedgehog Coffee Shop, so you can even nurse your hangover with some kind of egg-based concoction (or bagel/quinoa/spinach/pasta/whatever) and drink dynamite coffee while you hear some of L.A.’s most talented folks wrestle with the English language (and maybe a few others) for your amusement. There’s also potentially something new this month–a short video or two, exploring Tom Neely’s bleakest and strangest work as a graphic artist–but you didn’t hear it from us!