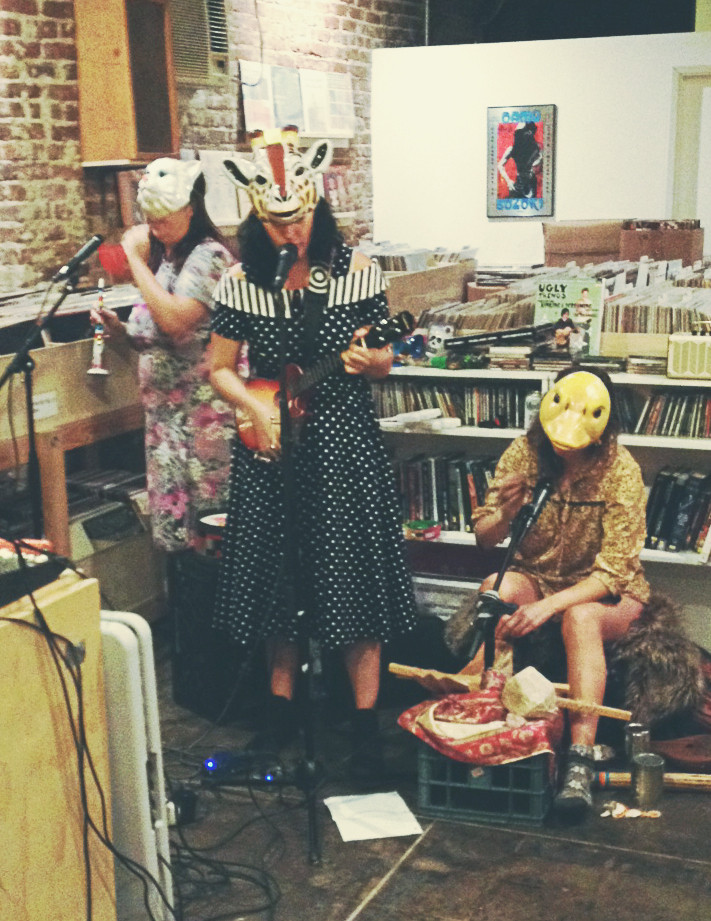 Bloody Death Skull is one of those acts you have to experience to understand, and then you still probably won’t, at least the first few times. You might start questioning your existence, remembering your childhood (for better or worse) and getting in touch with some uncomfortable truths about the world—all the major side effects of a profound LSD trip.

The freak-folky-psych outfit fronted by Daiana Feuer is more often than not joined by a cast of rotating members that seem like characters straight out of a fairy tale rather than just musicians. They incorporate trippy costumes and obscure instruments including (but not limited to) plastic kiddy toys, rocks, egg shakers and other percussive devices I can’t entirely make out.

This time they formed a trio, and it actually worked better that way since a good record shop show should feel intimate. After some technical snafus with the mixing board, Feuer plugged her ukelele directly into a strange but neat looking little tube amp. Her ukelele and voice are the main melodic driving forces in what is essentially an [otherwise] atonal group whose primary purpose is to provide complementary rhythm and sing backup. They got started right away, but not before strapping on plastic animal masks.

There is an undeniable pop undertone to the songs, but this is definitely not pop. It’s not really folk, either. I’m reminded of early (pre Sung Tongs) Animal Collective, but it’s really just its own thing. The strumming of the ukelele ranges from down-stroked moveable chords to a somewhat lackadaisical [open] chord pattern that augments the band’s quirk factor. The timing is an ebb & flow of signatures that seem impromptu but intentional. Still, there is catchy structure gluing everything together, and that’s what make the songs sound familiar and quite listenable.

Towards the end of the set, a toddler (there with her young parents) shouted out “MY MUSIC!” It seemed almost too perfect, because it was apparent this child understood the music as well as any of us did. Maybe Bloody Death Skull is the missing link between the innocence of youth and the [ironic] cynicism of the adult who yearns to be young again. We’ll never be young again, but at least we can feel young, was the sentiment I took away from the experience. It felt fresh and new, and I live for things of that nature.