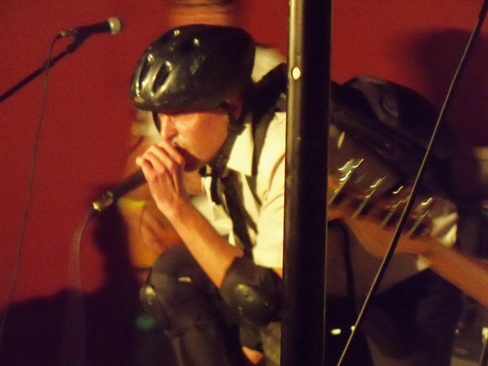 Patrick Jones of the Mormons

The legend of Al’s Bar, loud enough while that old-time trucker dive was open, resounded far beyond downtown L.A. in the years since its closure in mid-2001. This dank, art-sodden hole played cradle and nursemaid to an entire generation of tattooed rocker brats and a list of acts that played between its bricks would omit few late twentieth-century notables. My own memories of Al’s are very slight; no more than a stroll or two past the door on Hewitt Street and soaking up some pickup band that made Alice Bowie sound like Ruben & the Jets.

Shoveled-out, painted-over and fumigated, the site is now home to the Archway Studio Theatre, which this past Saturday eschewed its program of reimagined classics like Electra and Pygmalion for raising another species of dead. I arrived during a period of relative calm before the Mormons, which meant missing the holy head-slaughter that is Leaking Pigs, a misfortune remedied by mainman Wolf Woodcock handing me a cassette of the Imperfections ep.

The Mormons, sporting black ties, backpacks and bicycle helmets, piled onstage and into a short rambunctious set dominated by singer Patrick Jones’ efforts to ride a wheeled mop bucket. Just as stupendous were Groovy Rednecks, as big Tex Troester sweated and howled through what he claimed was their 776th gig. Scene aristos dallying outside on Hewett debated what genre this latest onslaught amounted to. It sounded to me like Commander Cody and his Lost Planet Airmen trying to thread a biplane through their own skulls. 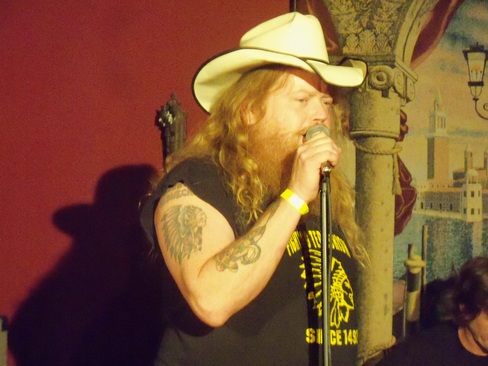 Even this much awesomeness had to come to an end, so I stepped outside to see two of LAPD’s finest just out of a festively lit patrol car. Management quickly squared them and we all wedged back inside for Jon Wahl & The Amadans, who do loony pop art tunes with irresistible titles like “Sing Low, Steve Marriott.” Wahl, onetime fronter for Claw Hammer, proceeded to jerk the room this way and that before handing it over to Carnage Asada, which served up a buzz-enabling gumbo of punk, blues and jazz as the sun went down over the Arts District. Nearby Traction Avenue began to fill with well-heeled youngsters and fat men in suits as punk rockers of every description closed in, filling the storied hole-in-the-wall to its modest capacity. 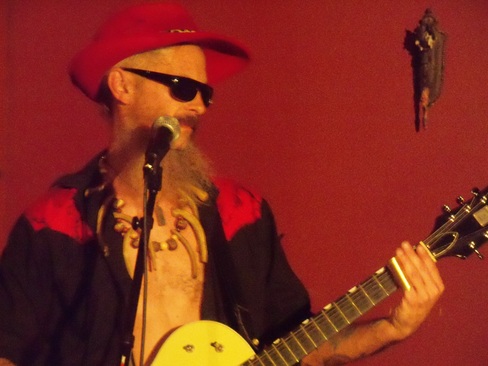 Lightnin’ Woodcock is an affable, knowledgeable, stringy bearded bluesman who grew up in this neighborhood and plays what anybody would call a badass guitar. He sang of fear and loathing and selling your soul to the Devil only to wind up at the American Hotel, an august establishment yet occupying the upper floors of that very building. His set fit the context perfectly and, from that moment on, everything about the show became broader and more stylized, as if we were all suddenly conscious of being in a theater with little distinct boundary between audience and performer. Woolly Bandits broke this flimsy fourth wall almost at once, with Christa Collins vamping outrageously and slicing through the crowd with her winsomely stentorian voice. Their backstory as Sky Saxon’s brilliant backup band before the original flower punk went off to that great gig in the ozone accounts for much, but addition of Ms. Collins classes the Bandits alongside Betty Blowtorch at the latter’s too-brief peak. 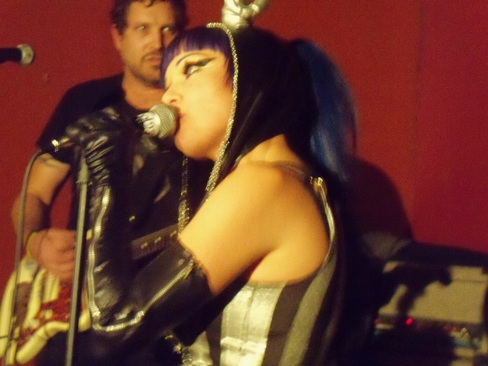 The wait for NostraDumAss was too short to do much but carry on the general surreal atmosphere. More downtown regulars squeezed in as onetime Flipside scribe Cake Nuñez and company threw down the noise therapy. Black Widows, done up as ninjas with black stockings over their heads, did a long shimmering pass at the kind of hard-edged soundtrack rock that vanished from B-grade action movies long ago. The landlord was deep into wrangling muni code arcana with two more LAPD officers as I slipped some distance away for some herbal medication, nearly missing the last band’s opening salvo. 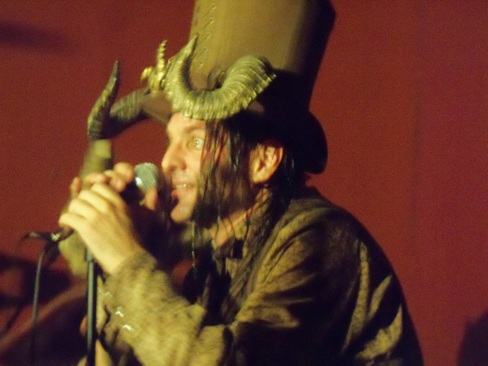 Pluggers away at the undying monster-rock genre since 1991, Rosemary’s Billygoat is just the kind of rolling absurdist freakshow that made Al’s famous and they did the entrance up stylishly, with frontman Mike Odd making a slow passage through the crowd to a prop electric chair, where he twitched and drooled foam impressively once seated. I’d like to say what followed was anticlimax, but actually it was a truly mindbending cover of Pat Benatar’s “Hell is for Children.” Semi-serious moshing ensued, along with enough pretty girls dancing to fill an A.I.P. Beach Party movie. It was all supposed to shut down at ten p.m. and did. Al’s may or may not open ever again, but this audience ought to have a monthly reunion.