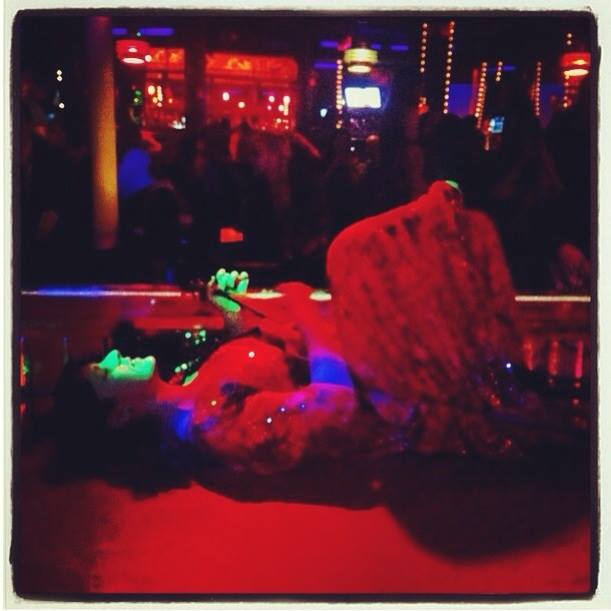 I walk into Cheetahs on a Saturday night and bump into some babe rubbing up on an older gentleman and I feel an immediate surge of “it’s going to be a good night.” It’s not even a perverted sentiment, but more of an intense fascination with this red, glowing den filled with strippers in lingerie, couples making out, men pawing on women half their age with dollar bills, the delightful stench of booze, and an old dude behind the bar smoking a cigar and watching the place like some Mafioso. I’m actually annoyed I’ve never been here before but that thought needs to take a backseat.

Holy Shit! Bloody Death Skull! I just didn’t expect this! Led by Daiana Feuer, the band featured an interpretive dancer, a drummer, and two back-up singers/percussionists. Bloody Death Skull melds lo-fi, 50’s rock/soul janglin’, ukulele twangin’, children’s toys a’ bangin,’ all like one big Cowboys and Indians meets Duck Duck Goose absurdity. It was like watching children play by themselves, admiring their imaginations running wild. Everyone up on that stage was having fun and completely in their own world. Daiana’s microphone licking, semi dress striptease, and ukulele feedback playing were accompanied by a girl sitting Indian style on the floor banging her head with instruments to the beat, a tap dancer, a drummer and another girl making sounds with children’s toys. With lyrics like “You know I’m psycho mama” and “Why don’t you be my husband, why do you keep on running,” Daiana coos tales of love and woe with the tenacity of a child throwing a modest tantrum. Bloody Death Skull wrangled in a few covers, including Meat Puppets’ (and later Nirvana) “Lake of Fire” and a Ying Yang twins tune where the lyrics say something to the effect of “Hey bitch, wait till ya see my d***,” all amongst a stripper writhing up and down the pole, dollar bills raining. When the playpen opera comes to an end, everyone is kind of bummed, myself included. Who ever knew in the heart of a strip club you could find this kind of gem.