Wednesday was the Echo & Echoplex & Origami Vinyl “throwdown” at Cheer Up Charlie’s, and this embedded journalist perhaps became too embedded, as I ended up DJing the indoor stage and having my movements be tethered to the power strip next to a PA mixer for the better part of an afternoon. Luckily the event was pretty loose and disorganized, so much so that I arrived to the strains of a pretty amazing and possibly unlisted all-black soul group with male back-up singers. No later band really matched that energy. The crowd-pumping band leader wasn’t singing the most amazing songs, but he was getting us to move our feet and greet the dawn… the 12:45 p.m. dawn, with excitement and exultations and hoots and hollers and “Come on, ya’ll”s and all the things that rock and roll was founded on and has never really abandoned with any kind of legitimate success. I wish I knew their name.

By contrast, seeing Body Parts play in the indoor stage was a major letdown, though I was alone in thinking so—a huge crowd squeezed their sweaty little bodies inside Cheer Up Charlie’s little cantina, and goddam if nearly each and every one of these excited fans, old and new, didn’t have a huge smile on their faces, like satiated sardines packed to the gills in the aluminum tin of indie rock. I dunno… for me, I want to do like the T-shirts say and “Keep Austin Weird.” While Body Parts have a lot of heartfelt-looking pining and closed-eye emoting, what we’re actually hearing is a well-played version of an overplayed genre, one I can see at 3 p.m. at Coachella any year, or even just when I close my eyes and think of the Troubadour on a Wednesday night. There’s just no flavor to indie rock, dammit.

Outside, on the second stage, Duologue was trying a little harder to have a unique sound, but they suffered a bit of the same bug—despite a violin player and a little more interesting groove than your typical indie concoction, again we had a singer talking over and over again about some vague personal tragedy that “would never work,” And we were sad. And forlorn. If only some girl with liquid eyeliner and a Magnetic Fields playlist on her iPod shuffle could come jump on stage and save his heart! 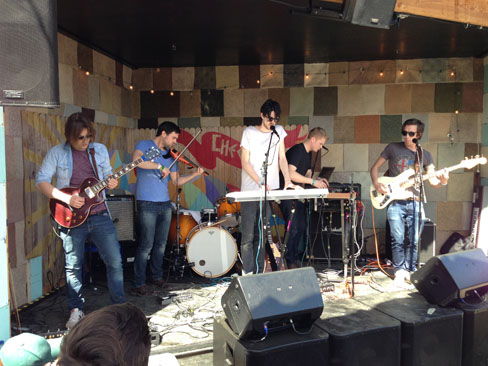 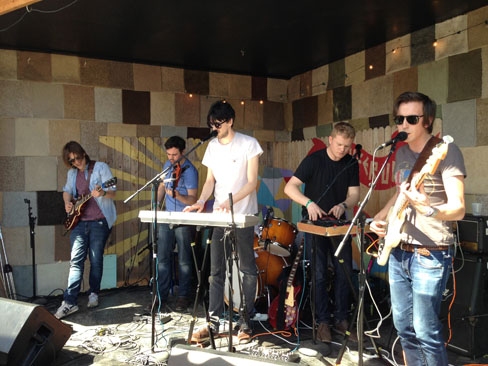 But I sat happily through the indie rock because I knew, at the end of the day, I’d be getting my first chance to see Gap Dream. This Ohio-based Burger Records band moved the shit out of me last year with their lazy but not jammy psych sound, which was similar though less jangly than bands like the Allah Las or White Fence—maybe “cinematic” is the word, certainly more insular and intricate than their aw-shucks demeanor would imply: 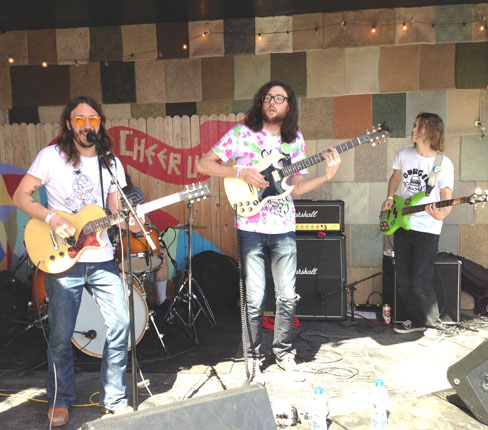 Live, they were a little faster and a little more Spartan sounding than on the tape, which is fine by me, and I was delighted to see Mike Reinhart from Feeding People on drums! 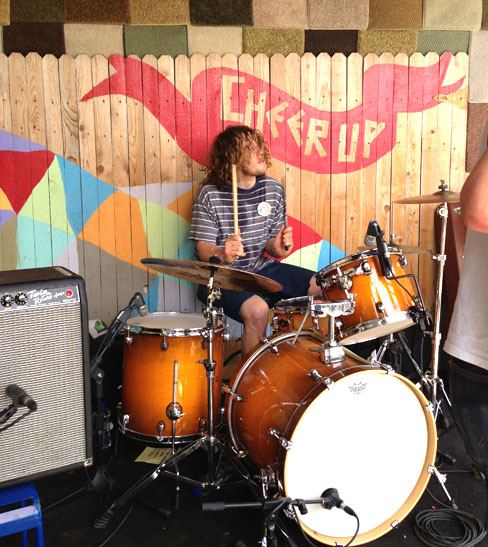 I love Feeding People, and when I interviewed them in 2011, Mike was one of my favorites. I was bummed to learn a couple months ago that Mike was no longer in that band—seeing him in Gap Dream was a killer surprise, kind of like when Bob Odenkirk joined the cast of Breaking Bad. Even cooler, Bobby May, head Burger merch-man, was on bass! 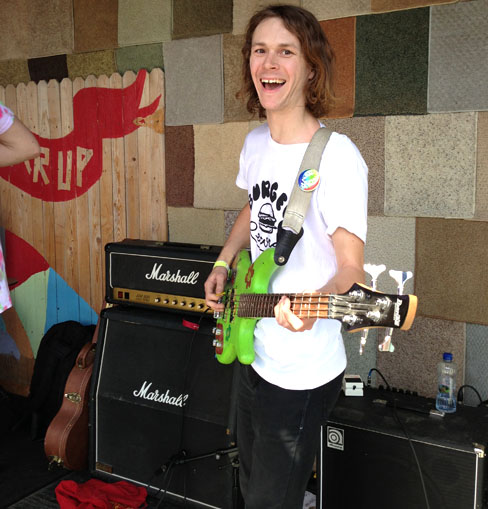 Back inside, A House for Lions was having a tough time keeping folks from fleeing outside. They had a double bass and earnestness, but maybe (and take my word for it, since the photos didn’t come out) they weren’t quite as cute as Duologue and Body Parts; indie rock fans are blatant cute-mongers, which is even more blatant than their racism. I hate to talk about this stuff, but let’s be frank: House for Lions singer Daniel Norman is black; his brand of soft indie rock is not a role that indie fans allow black men to fill. Have you ever noticed there are no black Coldplays or Arcade Fires or Sunny Day Real Estates, only black Crystal Antlers-es and TVs on the Radio? BLACK MEN IN INDIE ROCK ARE NOT ALLOWED TO GENTLY PINE!

But race or not, maybe A House for Lions wasn’t bringing their A game, and maybe they would do better if they didn’t insist on playing these slow, melancholy songs. At the end of their set they switched gears and suddenly played a balls-out rocker so fierce that I nearly broke my damned neck! Everyone noticed, even outside. People virtually lept back into the bar, their eyes dazzled in amazement, their mouths yelling things like this to absolute strangers next to them:

Again, So Many Wizards proved that every show they do at SXSW makes them stronger, though I felt perhaps in context that they were keeping their freak flag tucked a little bit deeper in their shorts today than they had the day before. But Devin Ratliff was really shining this time! 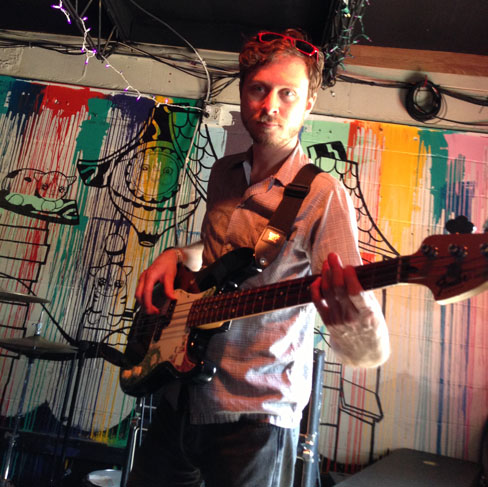 When you see a band over and over again on a tour, you get a chance to focus on different things each time, and this time I really liked Nima’s voice which, though certainly not gruff or raspy, sounded a little tired and hot, which fit in well with how we all felt at this point in the week. This guy in the dayglo hat is a man of the people! 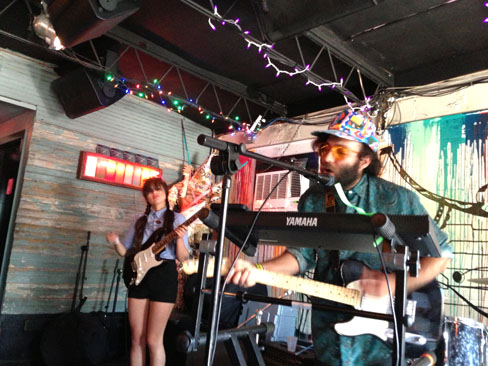 And they were followed by HOTT MT. In the days to follow I’d learn a lot more about this L.A. band, but for now I just found them really exuberant and refreshing, perhaps in part because of the visual serenity of the bassist’s blue hair. 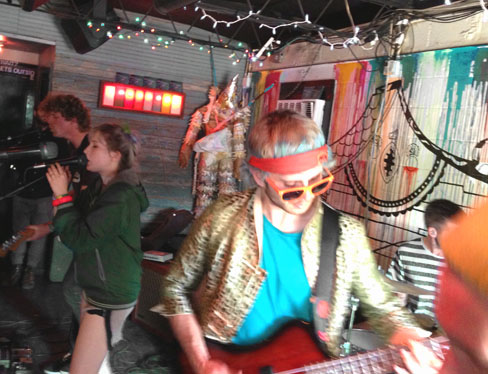 Singer Ashleigh Allard had a lot more energy and punch than what we’d seen earlier, a little happy shuffle to her demeanor, and it reminded me of the fun parts of the 80s that everyone forgets to include in their synth bands. I’m talking Kim Wilde, Lena Lovich, even Cyndi Lauper! And I don’t mean that the band was humorous or light, but there was a tiny touch of She’s So Unusual to their keyboards and the bounce of their tunes. They had a great energetic style that even consumed what I think were covers—since then I’ve seen them play three times, and I still am not sure if they’re covering Laura Branigan’s “Self Control” or merely wrote a song that captures the spirit of the thing for their own band, which at its base is supposed to be a post-punk collective—even the band’s misspelled party-sounding name is really an acronym for “Hour Of The Time, Majesty Twelve.” 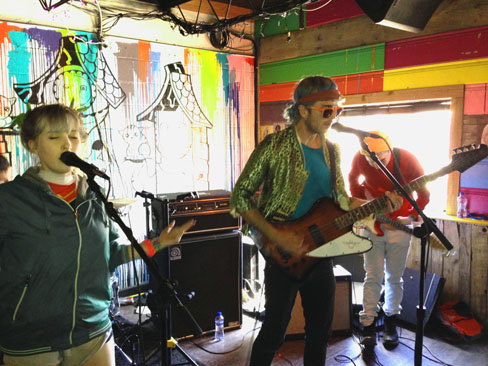 The next band had Rob Banks in it, who I’ve loved ever since he helped out in the legitimately misspelled  Totally Radd!! years ago, plus the Hot Tramps, both energetic rock bands about fun and basically having such a good time that your headache might actually be a giant tooth growing in your head that will help you gnaw the hands right off of Ben Folds forever and replace them with one of the robot arms in Herbie Hancock’s “Rocket” video so that the mutant hands can now play a rendition on keytar of Corey Hart’s “Sunglasses at Night” that will be twice as fast and feature real rockets. 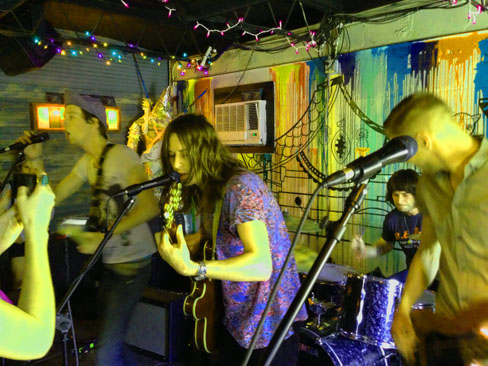 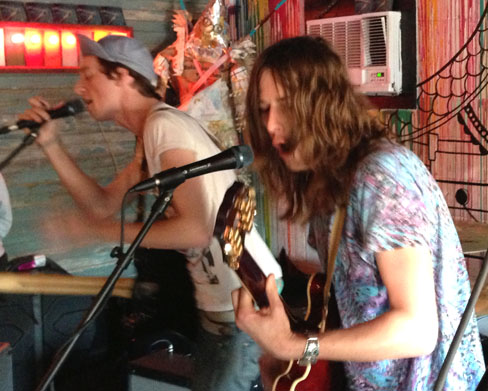 You gotta see this band before the inevitable happens and they are forced to find space and meaning and difference, because they just started and they will never be able to sustain this kind of intensity again. Or maybe they will… I interviewed these guys later, and it looks like they have Red Bull as an inadvertent sponsor, so here’s hoping they’ll get some caffeine in them stronger than Austin’s famously cheap-tasting blow. 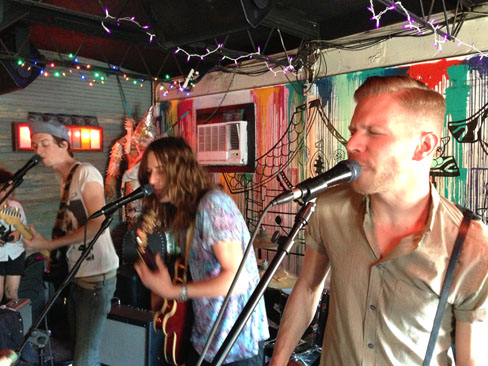 And then we had Sam Flax… it’s hard to express how wonderful this band is, though I have to admit, now that they’re getting famous, I’ve seen them do things like … smile. They seem to gesture to each other in ways that seem … considerate. And at least when talking to sound guys and bartenders, they even seem nice. 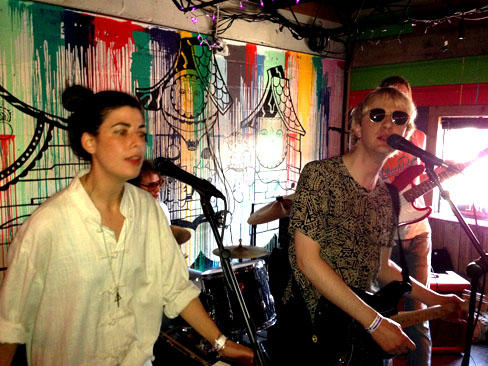 And their newfound humanity sickens me.

When I first saw them last year, they had a cold ironic 80s sheen about them, something about dark nights, silk stalkings, Blade Runner and the mystique inherent in the sweat seeping around the edge of a 100 dollar bill that breaks Panamanian drug dealers’ hearts. I fell in love hard with them last year during the warm-up to SXSW, and hearing their Burger Records cassette later only fueled that fire, since it was even less human—compared even to Gap Dream’s cassette or to some of the oddly recorded iciness-es of White Fence and other recent trippy bands, Sam Flax seemed more remote still, like something private that we shouldn’t even be listening to because you know, we hadn’t really earned it. It’s private party only, in the subterranean post-apocalyptic penthouse suite. We weren’t GOOD enough. 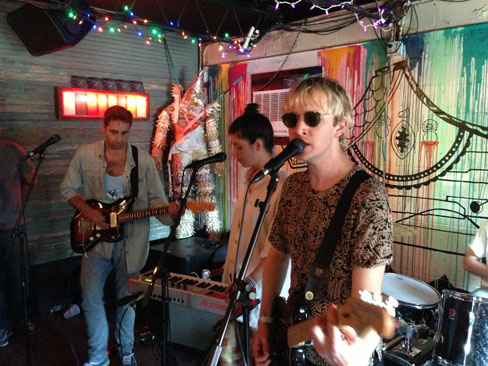 So seeing Sam Flax’s members occasionally turn the corners of their mouth up in the hint of a smile, or dress down a bit for the hot weather, even a little bit, humanized them. And I can’t have that. At last year’s SXSW showcase at Spider House, I asked them if they’d be interested in L.A. RECORD coverage for their band, and they didn’t even acknowledge my existence—I think our dialogue ended in a confused “what?” and with the band backpedaling to their car. This year they might easily have said yes had I asked! But I didn’t ask. 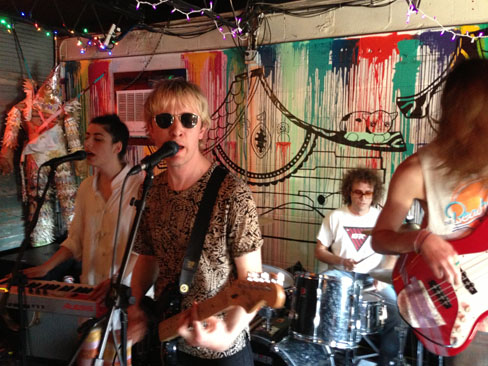 …but I should have, because they are still a wonderful band, still mysterious, still 90 degrees from everything around them, and I love them. Warts and all. Sam, call me.

P.S. Most folks refer to Sam Flax as a “he” but since this is the same core band that has played together for at least a year, and since I feel Amy Blaustein is as pivotal here as she was in Hunx & his Punx where at least she was counted as one of the “Punx,” and since Mr. Sam is NOT exactly ruling the band with Brian Wilson’s dictatorial genius contol, I will continue to call Sam Flax “they” live and maaaaaybe “he” in the studio if he continues to record all his own shit. It’s my own hang-up, I know. It’s like early Alice Cooper.

The rest of the night was spent watching noise bands, running around the river relatively sober while all my friends were on LSD and mushrooms, and enjoying a fantastic Reuben sandwich at Counter Culture, the best vegan restaurant in Austin! But more on that later.