SXSW started off this year not with a bang but a whimper, like the air slowly leaking out of a whoopee cushion. By Tuesday, the rockers and DJs had yet to arrive in Austin, but the movie/TV/comedy folks from SXSW’s first and more “official” week (including my favorite comedians, e.g. James Adomian, Josh Fadem, and Johnny Pemberton) had already split. This town was coming like a ghost town.

And so Tuesday afternoon at Spider House’s indoor lounge started off feeling a little lonely. The first act, solo guitar strummer Emperor X, played to a sparse crowd basically made up of the members of the day’s other bands, which was a shame—but it was also sort of appropriate, as his brand of highly introspective, lyric rich pain-folk was even more heart-rending when I could pretend with a good one-in-twenty accuracy that he (that is, the emperor himself, Chad R. Matheny) really was singing the song right at me. The stories he told in song were so specific and so piercing that later, I felt compelled to put a bunch of Photoshop crud over this photo just to keep from feeling too naked! 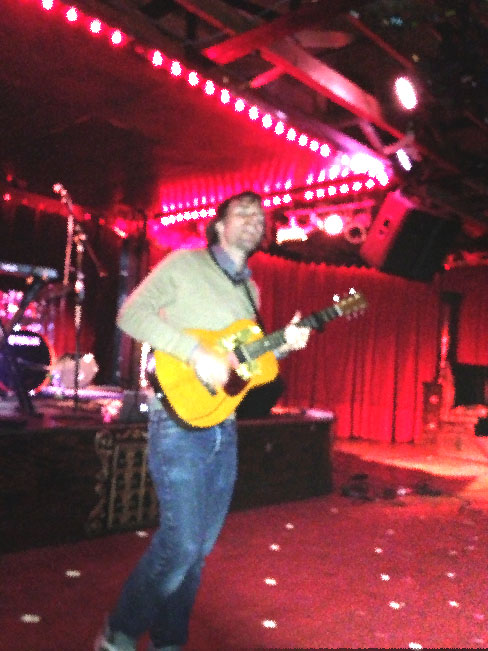 A lot more people had started to shuffle in by the time So Many Wizards started their set. That was days ago, and I still think the Tuesday show was the best one they’ve played in Austin this year, perhaps because they were raw from just getting off the road, and the slightly thinner first-day crowd meant they could be wilder and more experimental. I miss seeing L.A. RECORD’s own Geoff Geis up on the So Many Wizards stage (he turned in his playin’ shoes at the So Many Wizards Smell show a couple months back), but new bassist/drummer Devin Ratliff is keeping things going strong, with his epic timing and road-rough good looks–a nice match in both regards to the bouncy guitar mannerisms of Melody Carrillo. And then sometimes Devin would move to drums, and we’d get a bass-playin’ visit from this guy: 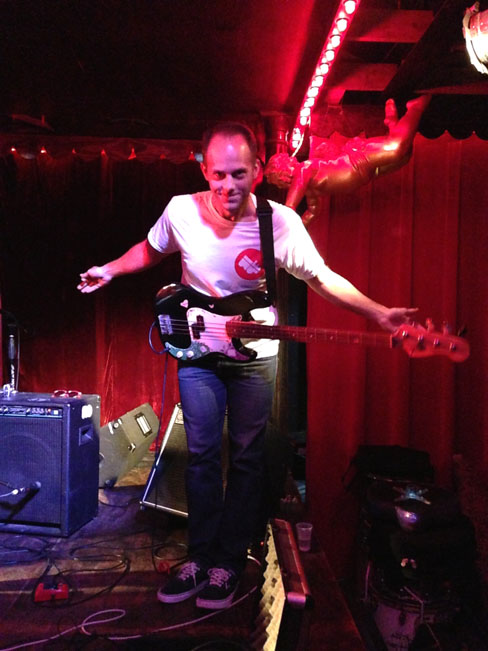 So Many Wizards singer and band-leader Nima Kazerouni is a complex dude. His scruffy beard, bright ensemble, and the psychedelic gleam in his eye all might suggest that tuning into a live show would be a trip down Donovan lane–and having “Wizards” in the band’s name might only enhance that prejudice. But aside from the kind of occasional jangly brightness beloved by all indie pop bands, there was no paisley prancing in this set, and the deliberate restraint and delicacy of these songs was anything but twee. 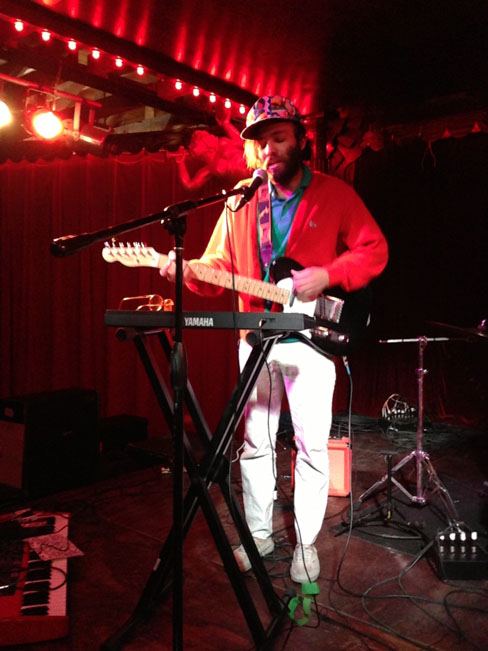 I liked how particular Nima was about his drum machine effect. With an entire Mac software set at his disposal, not to mention a real drum kit, he could have had any drum sound he pleased, but he preferred to pair many of his songs with the kind of analog binks and thocks that could have accompanied a game of Pong in 1973. It was simplicity that didn’t feel stark, and it brightened up what might otherwise have been particularly dark subject matter on a coupla tunes.

Religious Girls kind of irked me before I ever met them—really, do we need another band with the word “Girls” in the title? But their band was bad-band-name proof, and they rocked it out with the kind of technical proficiency I didn’t really expect from a combo at Spider House at 4 in the afternoon. I’m talking fast drumming, Fugazi-feel vocals about something I couldn’t make out but which was very important, and non-stop action and energy. It was so intense that I had to wander outside for just a bit where a completely different showcase was going on—I caught some mid-new-old-school hip hop from Austin’s Subkulture Patriots, who were bringing the Tribe Called Quest/De La Soul energy to the Spider House’s outdoor back bar. These guys played the Warped Tour last year. I’ve said it before and I’ll say it again, those Warped guys are getting to have some damned good taste in recent years. 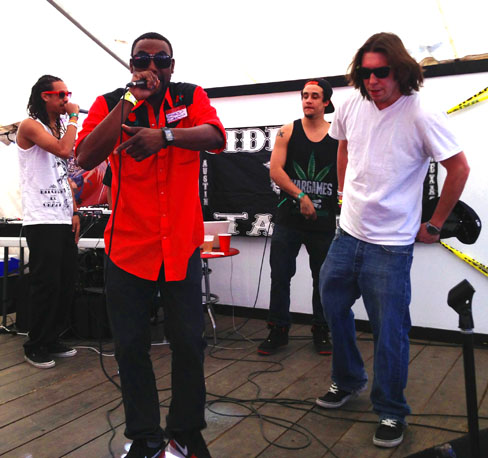 Back inside, Bon Bon had energy in a different capacity, the kind that comes from being almost sisters, off-and-on roommates, and travelin’ companions. Despite the fact that Drew Denny has been a contributor to L.A. RECORD for years and that I interviewed her for her movie in 2012, I hadn’t seen these gals perform in a long while, and I must say that I have rarely heard such exuberant,  ecstatic vocal “Whooooos,” the kind that go in and up and down and around and back and up and…. WHOOOOOOOO! Sure, I heard them in Drew’s old band, Big Whup (also with Geoff Geis, formerly of So Many Wizards–you see how incestuous this whole thing is?), but not as forcefully, and not with three ladies singing the fun phonemes in tandem.

This is a trio where everyone in the band has a great voice (and a great look, despite the fact that my photos of them didn’t come out for this show). While it was fun hearing Drew and guitarist Melody Carrillo (yep, same guitarist from So Many Wizards) sing in call-and-response (Melodie, all bangs and mystery, supplying the dark deep vocal that Drew and sometimes drummer Christina Gaillard would lend a higher-pitched response to), I think I enjoyed Christina’s vocals the most—maybe it’s genetic? Per the impromptu PR kit Drew supplied me with via text message just now, Christina is “Slim Gaillard’s granddaughter/Marvin Gaye’s niece.” Drew also informed me that these ladies found each other through Craig’s List—what life changing art have you made today based on things you found on Craig’s List?

The rest of my day was largely spent napping, unpacking, and recuperating, but I did manage to catch So Many Wizards again at Valhalla. 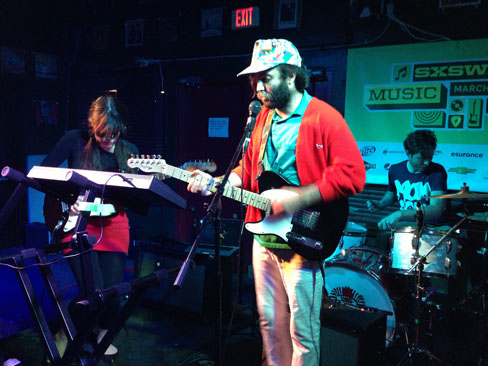 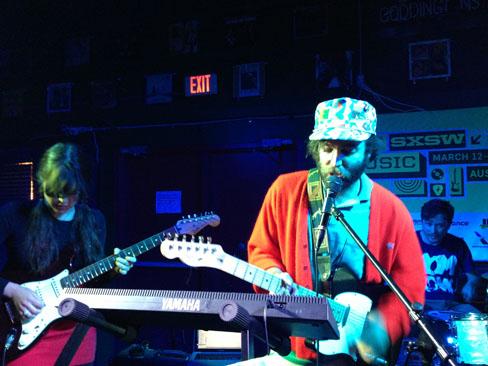 Look at those professional countenances! After only just one SXSW show, they were already tighter, happier, more like clockwork … it was great, and now there were tons of people pouring into town to see it all! If only all the comedy folks from week one of SXSW had stuck around.