I don’t know that I “attended” FYF Fest so much as I “survived” it—and as much as you might have felt a bit Mad Max-y after swallowing your first pint of sand while walking from the Main St. stage to the Hill St. stage (what happened to Leonardo and Shredder from last year?), imagine what it’s like to get to the festival hours early, carting pounds and pounds of L.A. RECORDS and chairs and water and all the things needed to endure a day of hanging out at a booth while other people have fun!

I did have fun, though most of the bands, like White Arrows, I could only hear from the L.A. RECORD tent. In their album review, which we decided not to print in this issue of L.A. RECORD due to its ambivalent negativity, I’d called them “bright, slightly bombastic indie pop that would probably go over well as a 4 p.m. set at Coachella, even though the singer sounds like Rob Thomas of Matchbox 20.” I’d say a 12:30 slot at FYF definitely sounded a little better than their album. And they did not sound like Rob Thomas. Much.

But they were no match for the comedy tent, which was oddly abandoned when I got there at 1:15 and then filled up rapidly as the set progressed. Host Baron Vaughn was by far the funniest comedian in what was a pretty crisp handful of nutty flakes. Jonah Ray did his cringe-inducing “dogs and semen” bit, and Pete Holmes felt charmingly awkward. The surprise special guest turned out to be Marc Maron, whose surprisingly calm, conversational comedy actually seemed to slow down time, making me forget that just feet away was a harsh sun and some bands, like King Tuff, I was dying to get away to see. 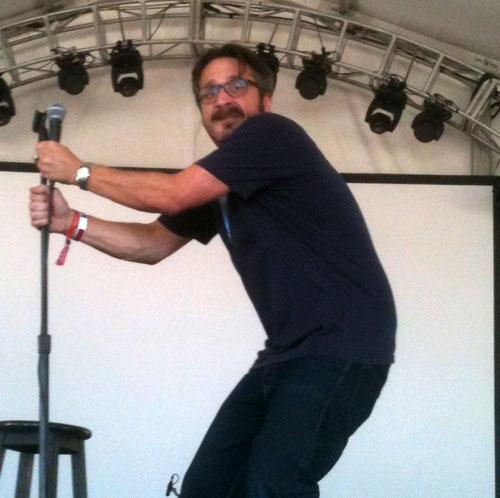 I’d just seen Matt Braunger on Tuesday night, and it was a treat that I might call “professional education” to see him do basically the same set today—some jokes, including his bit about playing bingo at the “Bigfoot Lounge” while drunk and high, worked even better in the daylight for some reason. I’d seen him do a somewhat oddly received set at Silver Lake Jubilee a couple months back (read: either he was high, or the audience was, and on the wrong drug), and it as good to see him back in top form now, do back-to-back hilarious performances in the same week. This kid is going places!

So is King Tuff, though we only heard him, and didn’t see him—the fucker ended his set way early, and so instead of catching the second half of his performance, I wound up getting chow mein noodles and watching Redd Kross from the food tent. It was a pretty fantastic set, even by their own standards, starting with “Linda Blair” and moving through a bunch of old and new goodies, including a cover of the Quick’s “Pretty Please Me.” Jason Shapiro of Celebrity Skin and Threeway has been playing guitar with them recently, and he has the sort blistering blustery to take them over the top without seeming over the top—well, maybe a little. Some chick came on stage for a bit and sang with the band—the rumor is that it was one of the McDonald brothers’ daughters, but nay, that must be a misprint. No way these guys could ever be mature enough to take care of another living being, right?

As soon as Redd Kross ended, we skedaddled back to the comedy tent and saw the SHIT out of Neil Hamburger, who was in top form! It’s always a little bit of a bummer to see this man in front of a sympathetic crowd, rather than an angry crowd. But he certainly was heckling people, including maybe me? I tried to get a photograph of the guy right as he started talking about how people who take photos at concerts were… what did he say? “Fags?” “Pieces of shit?” I was too far gone, swooning with the fact that I may have been insulted, to get the right words. Though I definitely heard him accurately when he said that the “greyest slime at the bottom of the bathtub” of the nearby Day’s Inn was definitely “Dinosaur Jr.” 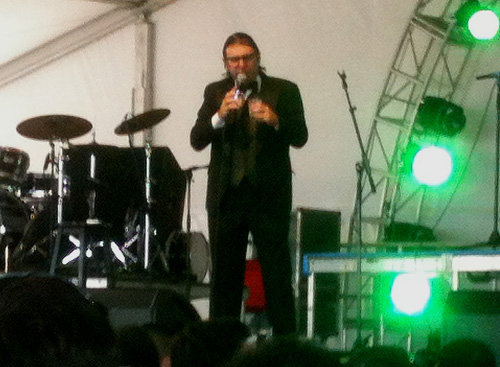 Back on the Hill St. stage, Frances McKee of the Vaselines was giving it even worse to her ex-lover and reformed band mate, Eugene Kelly, razzing him by saying things like, “Not that there’d be anything to compare it to, but I was the best you ever had!” Kelly, ever self-deprecating, assured us that “when she left me, I tied a knot in it.”

It was a great set, starting with “Sex Sux” and moving through great pre-grunge classics like “Oliver Twisted,” saving the big hits for later in the set. And honestly, that guy on the right… it was hard to tell due to the crazy sepia-tones of the summer sunset, but I believe they’ve still got Stevie Jackson from Belle and motherfucking Sebastian on the geetar! 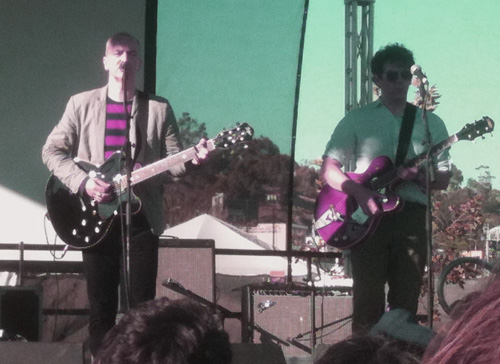 But the kids were barely moving, even though there is NO better music for awkward tweens and early teens to dance to than the Vaselines. None. The band was even getting heckled by one of the kids, to which McKee said, with a big smile and her adorable Glasgow accent, “I’m going to have to spank you later!” After a few suggestive titters from the crowd, she added “…and then shit all over you.” 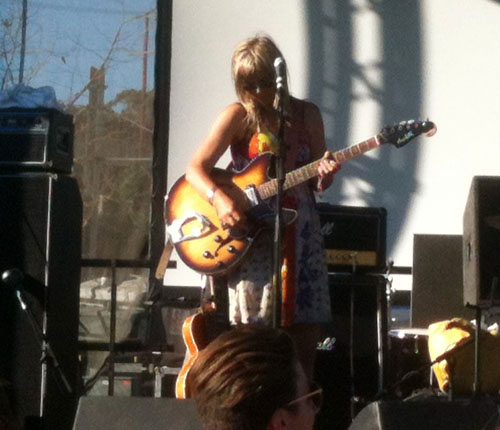 Have you ever seen Herzog’s documentary Grizzly Man, in which crazed naturalist Timothy Treadwell winds up interfering with nature by moving rocks around in a stream so that schools of salmon can reach his beloved, hungry bears? That’s how I felt with this crowd of teens—goddam it, why weren’t they going apeshit and crowd surfing!?!—and so I took matters into my own hands, approaching a group of likely-looking nerdling and coaxing one of them into getting up and riding the crowd. It didn’t last long, and it wasn’t repeated, but the crowd did then start slam-dancing, forming an adorable mosh pit that also seemed to be spilling backpacks, smart phones, and actual party whip-its out among its edges. Well played, me.

Honestly, the rest of the night didn’t move me much. Warpaint’s Cocteau Twin tinges were just as refreshing as ever on a hot day. The Purity Ring made smooth, shuffly dance music. And though I would have liked to catch Black Mountain, I found myself hiding out in the booth for the majority of the night. Only the Growlers really coaxed me out of my L.A. RECORD hidey-hole: they were in top form, better than they had been at Coachella, and I saw a lot of familiar faces from my favorite bands out in the audience. I wanted to last as long as DAM FUNK, I really did, but the dust was coating my throat so thick, it felt like someone had glued Astroturf down there. It was time to head to the after parties.