It was a typical Coachella story. A friend of mine who plays in Jimmy Cliff’s band had dangled the possibility of a Coachella guest pass in front of the part of my imagination that still dares to hope. And in the end, I was rewarded for my trust with a bunch of unanswered texts and a feeling akin to being ditched at the prom.

But I’d already secured a house to crash at in Indio with a pool and a gaggle of good folks, and I’d been to Coachella the week before anyway. So on I went, out to Desert Hot Springs and up to Dillon’s Roadhouse, to see a lineup of rad bands that I myself would actually have booked–as opposed to, you know, a hologram of a dead rapist.

I got to Desert Daze late on Friday night, so only saw a couple bands on the inside stage, including Ahkiyyini, who scared me with their extreme modern hippie garb, only to blow my prejudices out my third chakra with their evil, hard-hitting psychedelic tunes right out of the fucking gate. Only ten minutes into the weekend, and already I’d heard my favorite band.

These guys had sent me their demo in the past, and while it was… adequate, it didn’t quite capture the power of their live show, which featured dueling male/female vocals from Tait Alexander Nalley and Ali Kellog, both so shamanistic and sexy that combined together, they became a totemic hermaphrodite god(dess) from down the corner of the cerebellum, ready to spring forth right out of your loins into the part of your neck that creates the death rattle, where they’ll scare the shit out of you with a hearty “hoooWAAAAAAAH!!” These songs had a driving, juggernaut cadence, almost like something you’d recognize from those early Hawkwind albums, yet darker (insert Amon Duul/Chrome/Guru Guru reference here), with a touch of Edgar Allen Poe. It was Dionysus electrified, or maybe an Egyptian deity, bare-bones as a shriveled skeleton yet fat as a crocodile. 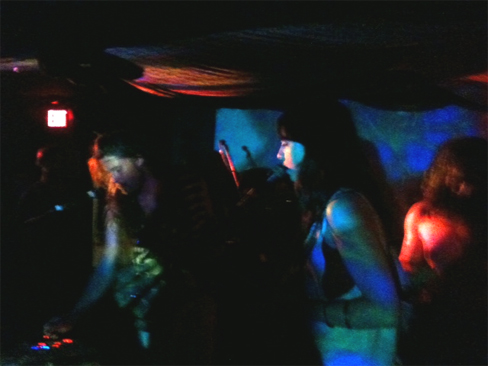 I stayed a bit for the next bands, then got a good night’s sleep and stumbled in early the next day, right into the set of Mysterious Everything. This guy didn’t attract a huge audience, partially because people were just starting to roll in, partially because people thought he was tuning up for a bigger band! A one man project (one of the 10,000 one-man bands better than Greg Ginn), Mysterious Everything had a bit of a raga Cluster thing going on. Maybe he had some pre-recorded tones and notes saved in his keyboard, but it seemed his refreshing drone tones were based on notes he’d just laid down, similar to how N O W operates but far more mysterious and minimal. Sure, it was hard to concentrate on in a desert bar, and I talked loudly to my friends right through the whole set. But I felt bad about it.

Next was Sleepy Owl, a psychedelic outfit put together by Tait Nalley of Ahkiyyini, my faves from the night before. But where Ahkiyyini had the strong feminine power of Ali Kellog as the co-anchor, in Sleepy Owl, Nalley led the charge alone, playing both yin and yang in a summery dress. To kind of up the ante, he’d brought two fantastic female backup singers with him, who were grooving and shaking things and in general making me wonder why this wasn’t OUTSIDE, where the shadows and contours of the music could have fully fleshed out the spirit of this project. 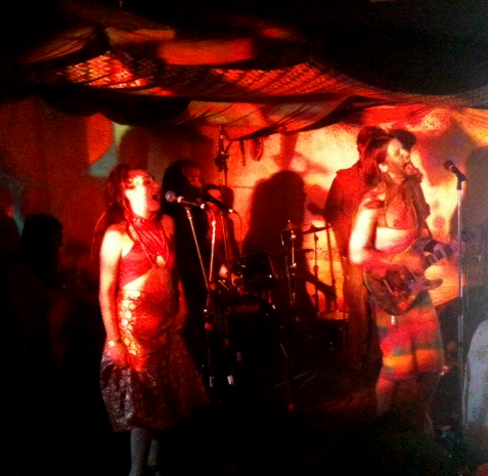 Then again, it made more sense to let the sun shine on a band called Joy, who mesmerized me so much that I had to order a Sailor Jerry’s drink special just to snap out of it. A gleeful, burly trio, these man’s men played stoner rock so stoner, it wasn’t anywhere close to heavy metal anymore. But it sure was bombastic, making one reminisce about an era I never knew, when radio rock was trying one last time to be relevant through sheer sweat, before the shiv of punk rock pierced right through it. 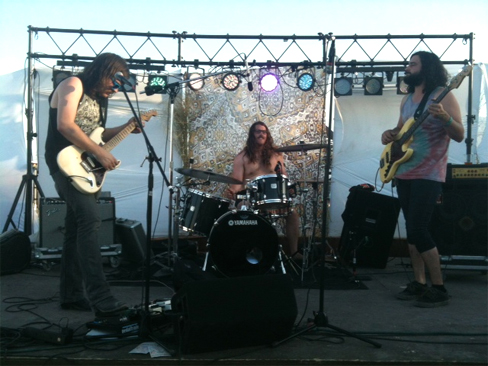 Back inside Dillon’s Roadhouse, I caught Silver Chords, who were led by the fabulous Sasha Vallely of Spindrift on vocals, plus two other lovely lady singers flanking her, all harmonizing together like if they reshot The Fly so that Three Dog Night discovered too late that Bananarama had been in the teleportation machine with them (for those keeping score at home, that’s a thumbs-up!). The legendary Bobby Bones stood to the side, aloof, on guitar, and some dude with amazing rooster hair and a mustache tickled the keys. They played some great garage-y psychedelic-tinged rockers, concluding with “Lucifer Sam,” an oft-covered song that usually lacks the punch of the Pink Floyd original; the Silver Chords made it their own. 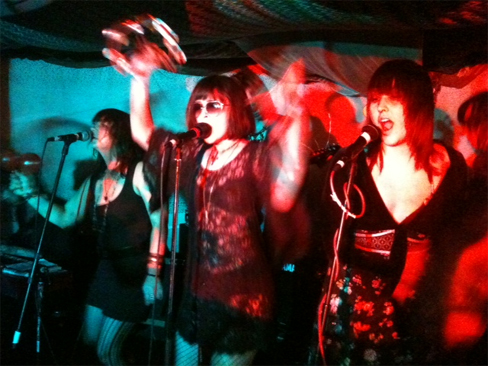 And whoever scheduled Silver Chords right before Strangers Family Band was a genius, because if there’s any band guaranteed to transition well from a cover of “Lucifer Sam” into their own set, it’s Strangers Family Band. Some bands, like Flaming Lips, love Roger Water’s mid-era stuff too much. But this is the first band I’ve known to have a therapy-worthy obsession with Waters as a bass player: like, literally, the first eight notes of their set on the outdoor stage were the descending bass lines of “Lucifer Sam,” and many of their other songs fell into that same template; what the Amen Break is to jungle, “Lucifer Sam”’s descending low end is to Strangers Family Band. It’s well past the point of mere reference: their song “Strange Transmission” is a reworking of “Lucifer Sam” that beats out even the Yeah Yeah Yeah’s “Crimson and Clover” make-over “Our Time” for second place in the Songs I Can’t Believe They Didn’t Get Sued Over competition (first place of course going to James Brown’s swept-under-the rug theft of “Fame” for “Hot (I Need to be Loved Loved Loved Loved”).

Strangers Family Band, I love you utterly, so please take these words in the positive spirit of healing that I intend: you can do better. You guys are the real deal, and with your skills, you could be headlining every Psych Fest from here to Austin to fucking Milan and Ibiza. You could be playing the Outdoor Stage at Coachella, printing your own brand of LSD, forcing Anton Newcombe to cry, replacing Roky Erickson’s backup band, and getting some top-shelf, all natural beav from gorgeous, wide-eyed hippie girls with powder blue dream-catchers in their hair.

You could be making Dead Meadow open for you! But instead you’re giving audiences the impression that you lack ideas. What you’re doing to Pink Floyd is not appropriation, and it’s not sampling; it’s hero worship. And your friends are too chickenshit to tell you, so let me spell it out as clearly as I can: STOP HERO-FUCKING ROGER WATERS’ RICKENBACKER 4001S. If you must steal, at least copy some obscure riff from the Orange Bicycle or Aphrodite’s Child or the third West Coast Pop Art Experimental Band album; then only me and DJ Nobody would know you’re biting people’s songs. But as it is, you are copying the first Pink Floyd album with transparent recklessness, and everybody knows it, and that’s a psychedelic sin.

Other than that, I still loved hearing you. I loved your shamanistic seriousness, your honest lack of showboating, your lyrical luminescence, your charm, and the classy way you kind of stay above the fray—especially you, John Rondano, and the crazy space-aged keyboard console you play that looks like a giant alien electric typewriter. 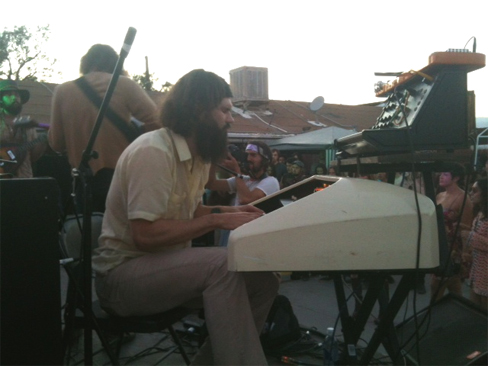 I love you guys, and I promise, my next review will be all nice things, because you are a dynamite combo. But please promise me you’ll find a cure for this malady. Take up thy stethoscope and walk.

Back inside the bar, after rejuvenating ourselves on the sounds of psych-blisterers Poor Sons, and the vodka from a clear crystal skull, we went outside again to see Spindrift, a band that further sweetens each time I see them, delicately, like bourbon; in another analogy, time is pulling them together more tightly, like the willow warping against the maple wood of a Stradivarius fiddle. It’s a pity that they didn’t put Bobby Bones of Silver Chords onstage, who had played the role of preacher in the film The Legend of God’s Gun, since some of their best tunes of the night were from the album of the same name, e.g. “Girlz Booze and Gunz.” I loved their cover of the Shadows’ “Apache,” but perhaps their best tunes were the ones slated for their upcoming album, Cowboy Songs and Campfire Ballads, some of which are theme songs that bandleader Kirpatrick Thomas culled from old TV westerns. It seems L.A.’s most cinematic cowpoke is turning to the small screen for inspiration. 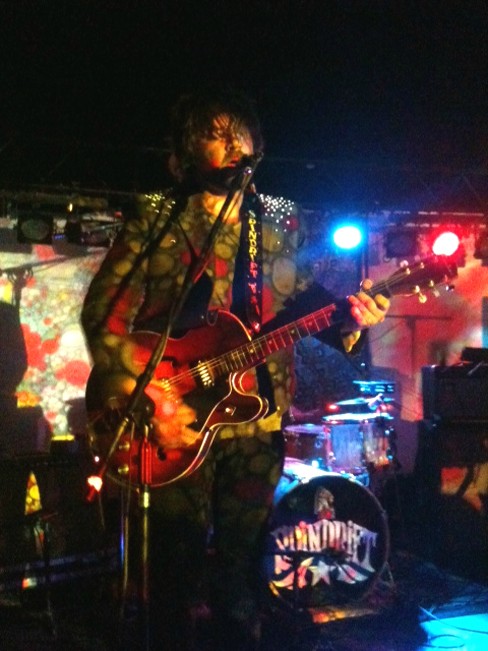 Another one man band, Barefoot Shrubs, started playing inside, and like the night before (has he played every night of the event?), his eclectic, sound-collage, electronic noise-adelia was a 180 degree switch from what we’d seen outside. The audience watching him was actually a bit sparse, and the friends of mine who cared to comment about him had nothing to say but derision. But I liked it, even if the hippie girls clutched their ears. 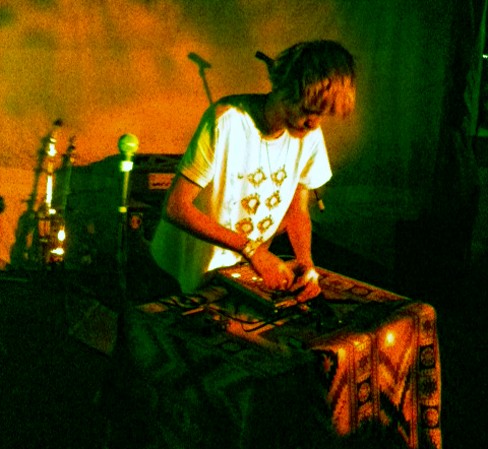 Back outside, Dead Meadow were a bit dull, so dull that at first, I didn’t recognize their sound. I chalk up their lack of zing 100% to the absence of Stephen McCarty on drums, now that original drummer Mark Laughlin is back. And it’s sad: perhaps they reached their zenith with the Three Kings album and film just two years ago. Now their attempts to sound more Hendrix-esque are backfiring, making them seem like a working-man’s band at best, rather than an awe-inspiring monster of mindfuck. Come back to the light, boys. Even with McCarty, you guys have to do something to get that tight trio sound away from all the shenanigans and goings on that are making you weak sauce. Though perhaps the lack of oomph stemmed from the outdoor stage’s sound, and not the band itself—Dahga Bloom inside were able to keep us excited with their steady go-go-go psych sound, with energy very similar to Dead Meadow’s Hollywood Forever show in 2012, albeit with a sound that was very different, kind of Middle Eastern, with vocals like Mike Patton’s drunken Muppet son.

The rest of the night was a bit of a, well, a daze, as the heat and my own exhaustion were causing me to fall asleep as I took notes in the dark corner in the back (and yes, there are embarrassing photos on someone’s Instagram that I’d gladly pay to destroy, if this were the 70s and one could still destroy photos). Cosmonauts were sounding more mature, like they’ve grown even since I saw their performance at SXSW months ago, and Crooked Cowboy once again proved they were just as fast on the trigger as Spindrift—it’s always a pleasure to see both bands on the same bill, especially in the desert. It’s a friendly creative sparring that reminds me of Matisse and Picasso in the later years of their lives, but, you know, with Ennio Morricone being the paint they both use, which they dab on rough canvas with sagebrush.

But the sandman was calling me, and I’ll have to give a conclusive verdict on the winner next time.