There were so many deserving bands playing in the early hours on Saturday, but fuck ‘em—the first band I saw was the Black Lips, and they were worth waiting for. 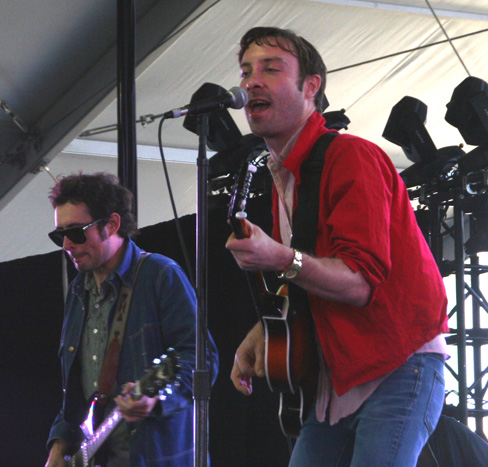 I was wondering why the Black Keys the night before had failed to move me, but now I remember: there are two kinds of garage rock, just like there’s a difference between modern country and roots country. And though I shudder at talk of “authenticity” in music, because it’s usually code for hating the kids with their new-fangled contraptions, there’s no argument that there’s something irreproducible in the sound of the Black Lips. And the Black Keys are one word and one world away from it.

“I want to thank you for all the things you’ve done to your body,” Cole Alexander told the melatonin-starved space cadets in the audience as they jumped into “Dirty Hands,” a bizarro-world Beatles number. Then they moved on to “Oh Katrina,” that New Orleans epic, with pure Back from the Grave fuzz, and screams like Zachary Thax, almost approaching the screaming, Peruvian, coca-leaf tea insanity of 60’s Lima rockers Los Saicos. 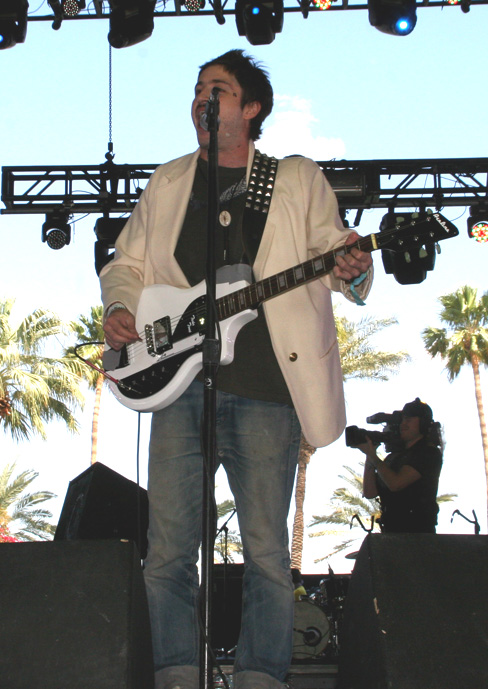 And the Black Lips kept going on, moving from country-esque rockers to full LSD-echo vocals, with lyrics about blood and dumpster diving. My favorite tune may have been the one from the upcoming album, “Time,” a surprisingly hopeful number that reminded me a bit of a David Johansen-penned tune. But being Coachella, Alexander couldn’t resist ending with a golden oldie, i.e. taking off his pants and beating his instrument with his implement. And the crowd went wild… 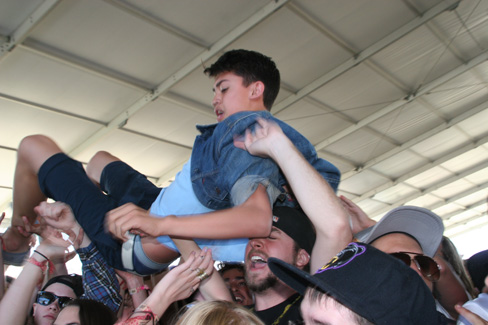 But I missed the meat myself, because I’d gone next door to the Gobi tent to catch fIREHOSE, where Mike Watt was slapping his bass with his erect fingers. For some slightly older gentlemen who’ve been broken up for the lifetimes of most Coachella patrons, fIREHOSE jammed pretty econo. Ed Crawford may look a bit like the “Life Is a Highway” guy nowadays, but his lyrics of pain and heartache made this less of what fIREHOSE is known for—being a continuation of the Minutemen—and more of a force on its own. As post-Minutemen projects go, I must say I prefer Mike Watt’s Secondmen, or even Dos, to the funk-rock of fIREHOSE. But it’s nice to see Watt backing up someone like Crawford, whose bright guitar noodling had an almost country flair. 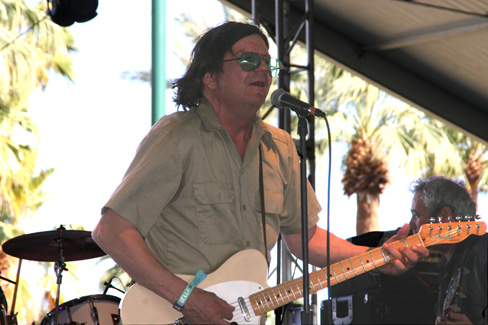 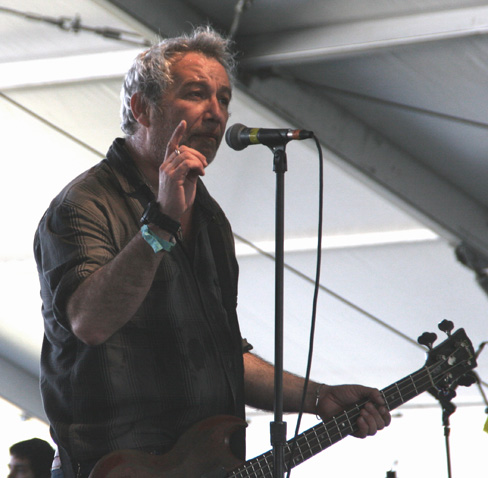 They were, however, nowhere close to being a match for the Buzzcocks. What bandcould have been? Even Coachella’s schmoozing celebrities left the netherworld of the backstage trailers and ventured out to watch the action, like rats following the scent of a luxurious limburger. Tim Roth in the gated guest area politely let friendly photographers snap his photo … 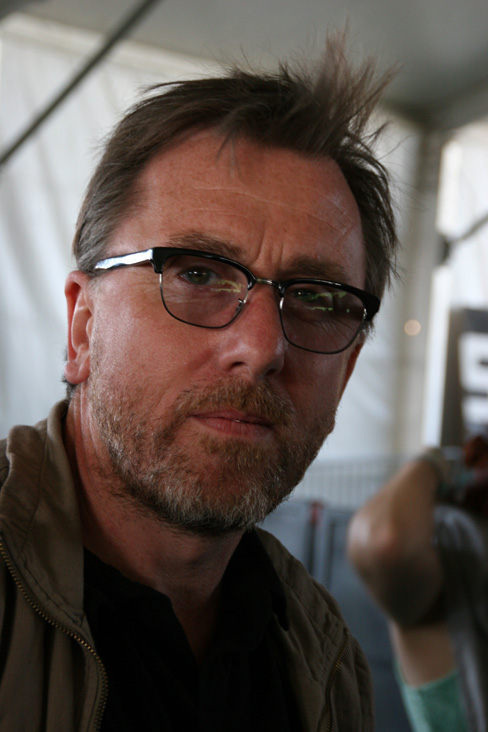 … and Dylan McDermott let me know his favorite Buzzcocks song was “Ever Fallen in Love.” He was nice, though I wish his big noggin wasn’t blocking my every damn photo! 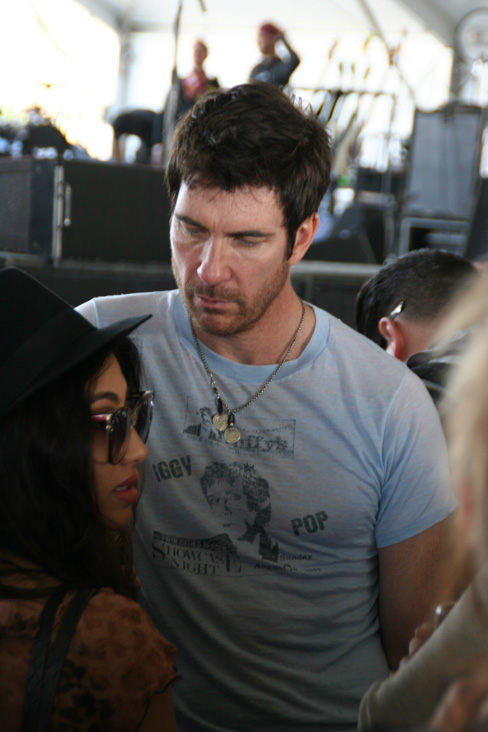 Of the remaining two Buzzcocks still playing out, Pete Shelley really looks his age, whereas Steve Diggle is youthful, gleeful, spasmodic, mod-looking; basically, he’s become the Flavor Flav to Shelley’s Chuck D. True, Diggle looked a bit like Roman Polanski when he smiled, and his windmill guitar riffs were completely Pete Townsend. But there was no imitation in the uproarious crunch he brought to his guitar with every sweep across the strings. He was jumping up on things, and pointing at the crowd, running back and forth into the light, all the while Shelley intoned his songs as lively as ever: “Fast Cars,” “Autonomy,” and even the post-Buzzcocks hit “Homosapien”—not sure if it was as good as the Big Dipper version on the Freedom of Choice comp, but that’s just me being a child of the ‘90s.

And maybe that’s the secret of the Buzzcocks, that everyone who has ever liked punk rock or even been a teenager (well, at least a teenaged boy) has loved this band. There were folks in the audience old enough to be my dad, who were screaming along with glee, as well as youngsters from bands like Images, all on the sidelines chanting with every chorus.

Oh, the sentiments of Shelley’s songs! “I just want a lover like any other/what do I get? I only get sleepless nights, alone in my half-empty bed.” It was just as true at age 13 as it is at 35. And while that kind of sentiment could be sad, you can’t cry when you’re shouting “ohh-ohh” in unison with hundreds of people in the spring sunshine. It was a chorus as loud as a soccer chant, only topped when they followed it with “Promises” and its extra “ohh-ohh-ohh.”

After a palate cleansing trip to the Safari tent to hear the bass-heavy, four-on-the-floor Canadian electronic duo Zeds Dead, I checked out Squeeze at the Mojave. And I was late—got there juuuuust in time to catch “Up the Junction,” possibly the best pop song ever to imbue a narrative with a false ending. Though singer Glenn Tilbrook had grown General Custer’s beard (which also dangled a bit like Col. Sander’s bow tie), and I wished they could have talked Paul Carrack into reprising his vocal on “Tempted,” these guys sounded exactly the same as I imagine they would have in 1982. The timeslot was perfectly 80s, too, as the sun had just set, and the polo field palm trees behind them were lit up in neon colors that matched their evening jackets, like in a Miami Vice nightclub scene. There was a little weirdness here and there from keyboards that didn’t quite fit, but if awkward keyboards aren’t the Squeeze sound, I don’t know what is.

I’d thought that Squeeze would be a hard-sell for the Coachella crowd, with a demographic that seems to be 18-30, too young to remember Squeeze. Looking around me, I saw a lot of crows’ feet and tastefully covered middle-aged midriffs belonging to people who wouldn’t seem like a fit for Swedish House Mafia or Dr. Dre. And there were hundreds of them in the Mojave tent, hundreds of folks who knew all the words to “Pulling Muscles from a Shell” and “Goodbye Girl.” Were these the parents of the glow-stick panda-hat generation? Was the Squeeze show basically a concession to the old folks, like one of the karaoke bars open until 11 at a Disney Resort?

Then again, the Shins on the main stage were just as gentle and careful with their pop craftsmanship, and they were perfect for a festival like this, far more so than the huge spectacles we’ve been seeing on the main stage during the other nighttime slots. Whether you watched the Shins up close, or watched them projected on those big ol’ screens, or just wandered around trying to find a vegan hot dog near the main stage, the Shins’ music followed you, lovingly wrapping itself around your ears like your grandmother’s quilt on a cold night. (And it was cold. It fucking was. Fuck. This article is based on memory, because my fingers were too frozen to hold a pen. Damn Al Gore and his lies. Burn down the rainforests).

New member Jessica Dobson was the Shins’ secret weapon. Her guitar playing and stage presence, and of course her glowing vocal accompaniment, made this a special show unlike the songs as you’d hear them on the albums. And while you’d think the acoustics of a big show would be too boxy and bass-y for a gentle string-based band, they sounded great, with every string-scrape and knuckle-rap captured perfectly and presented to us like a little package. Even the flaws were charming. When singer James Mercer couldn’t quite hit the high notes on their big hit “New Slang,” it didn’t feel like he’d fooled us with a take-in-a-thousand, as Ween once had on “Freedom of ’76,” it felt like a chance to acknowledge our graciousness.

I wandered from the main stage to the Outdoor Theater to see Feist, expecting more of the same. But boy howdy, she’s expanded her band into a literal orchestra, one with glowy red things strapped to the guitars and instruments and various other doodads. Perhaps because this giant collection of musicians on horn and woodwind and string instruments and strange percussion (was that a leather chiminea?) didn’t have a true conductor, it sounded a little bit like high school, a collection of friends with instruments rather than an ensemble. In fact, some songs, like “the Bad in Each Other,” featured a kind of Bow Wow Wow, rim-tapping percussion that felt very much like a pep assembly. But that seemed fitting, as if Feist had taken her Sesame street appearance from a few years ago and gone full-tilt kid friendly.

Well, sorta: she still has the womanly, slightly dry alto voice that made her famous, the one that abruptly gets caught in mid vowel change, like even just talking is going to make her cry. This time out, a trio of female singers (I almost said “weird sisters”) flanked her, cooing with a knowing glance during every chorus. And the orchestra had a sheen of tenor and bass saxophones to fill out the bottom end with a nice devilish growl. But my favorite part was when she decided to rock out on “I Feel It All,” reducing the sound to the bare rock band components and leaving her 30-some-odd piece ensemble with nothing to do but clap their 60 hands.

It gave me an itch for more rhythmic music, and Flying Lotus at the Gobi tent was ready to serve it up. When I got there, he was holding court over hundreds of people as though it was nothing (because honestly, compared to Low End Theory, it really wasn’t). The glitch-hop godfather was in the zone, breaking off new beats every forty seconds or so, a bottle of Jameson next to him and his mike at the ready, not to rile the crowd up so much as to express his thoughts. “I know sometimes my stuff is deep and emotional. And sometimes it’s fucking crazy. But it’s always hard!”

Suddenly he announced Thundercat, the jazz bassist (who was scheduled for his own show on Sunday). Thundercat, a man after my own flamboyant heart, was wearing an animal mask as a skullcap, crazy Hawkman wings jutting out backwards on the sides of his head, and raccoon tails hanging in front of each ear. This crazed P-Funk era looking creature jumped on bass, and an amazing drummer (whose name is TBD) jumped onto a huge drum set, and what had just seconds before been a glitch-hop performance now became spooky jazz fusion, with Flying Lotus laying down some haunting synths over a smattering of blippy bass and bombastic drums.

“Raise your hands if you’re going to see Radiohead after this!” exclaimed FlyLo, but first I had to get away and check out a band I’d never seen, Godspeed You! Black Emperor, who attracted less of an audience than they deserved just due to the timeslot preceding Radiohead. Their rock ensemble, with dark Americana tinges, played facing themselves, with no stage lights, with tattered black and white imagery behind them and the occasional clip of spoken-word sermons (maybe David Koresh?) breaking up their set, which moved me in ways I haven’t felt since my Cialis prescription came through.

Finally it was time to face the music and go see Radiohead. And while they were good, and Thom Yorke’s voice was in top shape, songs like the opener “Bloom” sounded best when they got tropical, reminding me almost, and this is odd, of the Growlers. Perhaps Radiohead is the Beatles of our time, or maybe they’re the U2, but this journalist would rather deal with bands than with cultural monuments. And so off I went to try and get some sleep, so I could enjoy more bands on Sunday.

VIDEO PREMIERE: JOEL JEROME “IT WILL FEEL GOOD TO DIE”