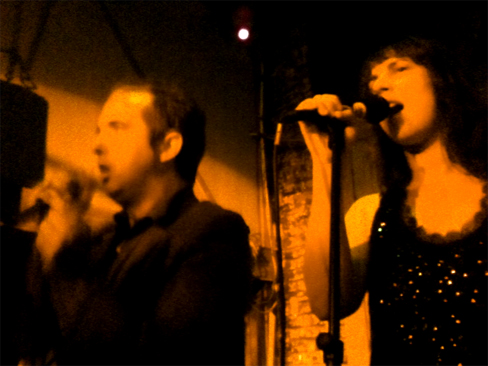 It was the LAST EVER JAIL WEDDINGS GIG (at least until the next one in a couple months)! And lordy, if I wasn’t at Harvard & Stone yet again. This place, for good or ill, douche lair or no, has been hosting some amazing bands lately—and their classy cocktails are pretty fucking solid too, cheaper than you’d find downtown at places like Cole’s, though still more expensive than most L.A. RECORD readers can afford. Luckily us L.A. RECORD writers have pens that make Benjamins, and we can afford as many Manhattans as we please. To paraphrase Steve Rubell of Studio 54, “Only the mafia makes more money!”

But I hadn’t had quite enough to drink to enjoy the Herbert Bail Orchestra, who started later than even Jail Weddings had been scheduled, and then played a set that seemed to slow down time itself, with songs that had great instrumentation (especially on the part of Andrew Katz, the accordionist/trombone boy) but nothing in the way of song craft. 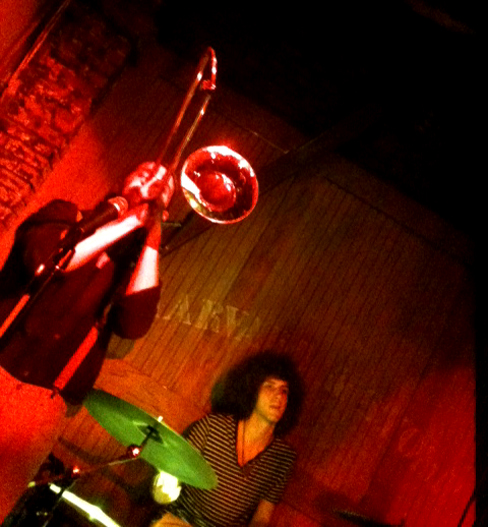 That said, these guys do know how to start a set. Their first song was pretty good—and for about 30 seconds I pitied Jail Weddings, who would have to follow this band that even had a singer (Anthony Frattolillo) who sounded quite a bit like Jail Weddings’ Gabe Hart, but maybe even slightly stronger.

But there was a certain lack of bite, and by about the fourth song, even Frattolillo’s voice had receded from a glorious pub rock ripple into an ocean of 90s masculinity, somewhere closer to Stone Temple Pilots than to the speakeasy blues they seemed desperate to attempt. Or maybe they switched vocalists, I dunno—I had already drifted out to the smoke hole in back, where I stayed for the entire duration of my friends’ two cigarettes. When I came back, I was astonished to see the Herbert Bail Orchestra STILL PLAYING! Were they ever going to let Jail Weddings take the stage?

Eventually all nine members of Jail Weddings did get their chance, and I got my first chance to scope out their revamped 2012 lineup. Brian Waters had disappeared, but Jill-of-all-trades Jada Wagensomer was still up front as a backup/duet vocalist in a shimmery dress. And this time round, L.A. RECORD’s very own Kristina Benson was in the chorus line as well, along with Mary Animaux, newly of White Murder (her co-singer in that band, Hannah Blumenfeld, was across the stage playing violin). 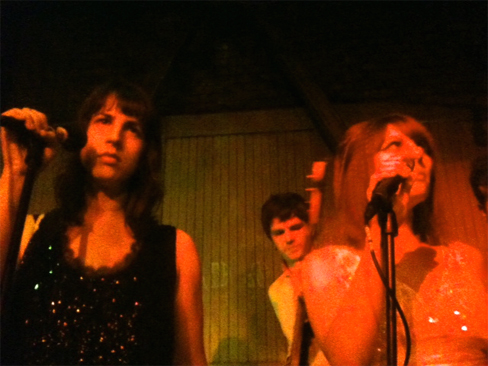 God, is this band filthy with talented folks. Sometimes I get the feeling that there’s a secret collective going on, with members that rotate between Jail Weddings and Dante vs. Zombies and Raw Geronimo and Swahili Blonde and Johnny O’Donnell and White Murder, and that when “Jail Weddings” plays, it just means it’s Gabe Hart’s turn to conduct the collective.

And he was conducting, masterfully leading the charge even while swaggering around as if in a stupor. I suspect his drunkenness was faked, or at least exaggerated. The man hit all his queues on time, and was able to get his band to follow his lead on every song, even when he ended one song by groveling face down on the floor and didn’t get up in time for the next one. Every little move by the audience, or extra ounce of boogie by his band, was an excuse for ol’ Gabe to jump down off the stage and saunter amongst us. And when Luis Arriaga, i.e. Luis of the Wildfires, magically appeared in the audience, it brought down the house! Hart dedicated a song to him, and there was hugging and dancing and mirth that can only happen when you’re playing songs with names like “What Did You Do With My Gun?”

The gals’ harmonies were great, Wagensomer’s vocals being particularly lovely, and the show’s climax was punctuated by an audibly shattered glass right at the foot of the stage. Can’t wait till they come out of hibernation.