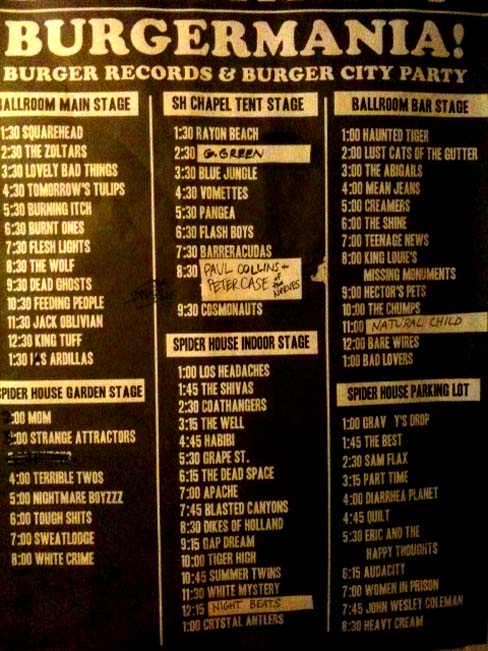 We got another late start on the day after the whatever-eth consecutive night of going to bed at dawn and waking up 4 or 5 hours later and, following some homemade sangria and venison burgers (appropriate fare for our next destination), made our way to Spider House for Burgermania, a daylong, seven stage muzak extravaganza put on by L.A.’s Burger Records and Austin’s Burger City Rock and Roll and encompassing a mind-boggling 76 bands in total.  When we arrived, Mean Jeans was just finishing up in the Ballroom bar stage.  We were lucky enough to make it in time to hear their extremely catchy “Pogo B4 U Go-Go,” a superb instance of punk/pop Ramones’ induced locomotive mania.

Inside on the Ballroom’s main stage Tomorrow’s Tulips kept the crowd grooving on their sun-baked, Pains of Being Pure at Heart meets Endless Summer sound, less overtly intimate than P.O.B.P.A.H, but sharing some stylistic similarities with the NYC indiepop duo.

Back in the Bar area, the Shrine were setting to up melt as many faces as could be jammed into the smallest of Spider House’s seven stages, an intimate setting that the Shrine used to their advantage when singer and guitarist Josh Landau walked along the top of the bar playing nonstop a frenetic solo that would make Kirk Hammett blush.   I have it on good authority that a certain rock writer even got in on the action, shredding some tasty licks (literally) on the guitar strings with his tongue while Landau wailed away. 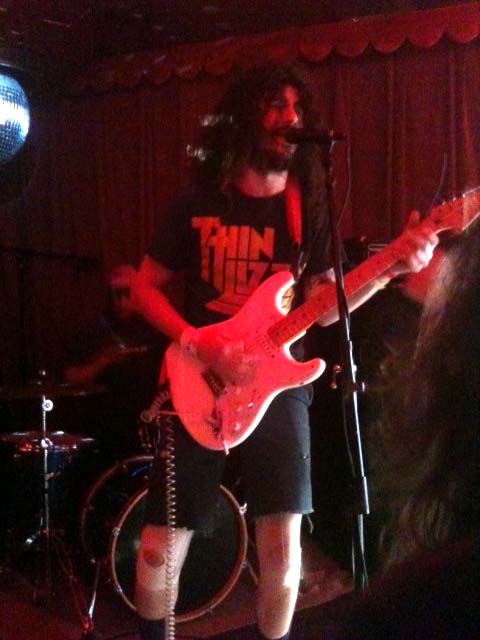 Meandering around back to the makeshift streetside stage, we saw Audacity belt out a few of their high-energy garage rock tunes, punctuated by interesting stops and progressions as well as an attitude that is at once aggressive and jovial. 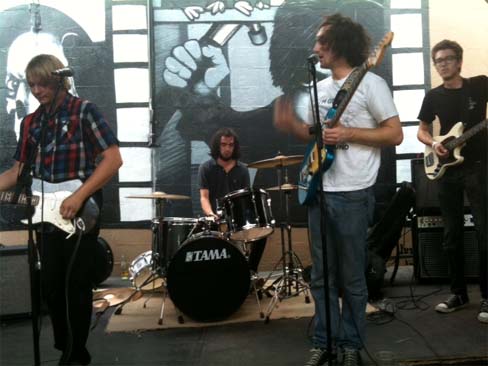 Inside the Spider House proper, the bar-room stage was featuring Apache, who blasted apart any cobwebs that might reside in such an apt-ly named venue and slammed the crowd into a frenzy, even without their regular lively frontman Omar, who couldn’t perform at today’s show due to illness.  Nevertheless, they kept spirits high with songs like “On the Outside” and “Finger Banger.”

After a short break to find some much needed Greek food, we made it back inside a rapidly filling-to-capacity Spider House to the courtyard stage, where we promptly ordered four Jamesons on the rocks, and waited for the highly anticipated appearance of Peter Case and Paul Collins of the Nerves.  This show lived up to any and all expectations, and included a number of Nerves and Plimsouls hits that were close to hearts of both the performers and the audience.  Among them were the Nerves classic, “Hanging on the Telephone,” as well as The Plimsouls’ “Everyday Things,” and “A Million Miles Away,” a song made famous in the 1983 film Valley Girl. 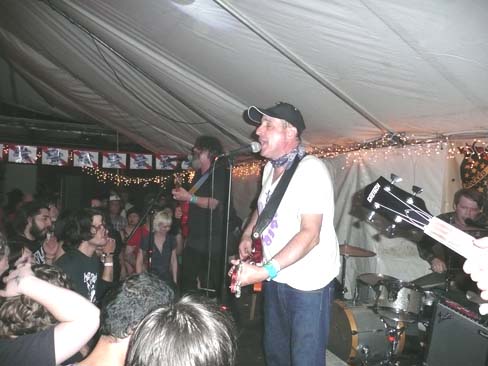 Tiger High played on the Spider House Bar stage to an enthusiastic crowd where the excitement threatened to take out the wires connecting the keyboard and pedals after one fan’s unintentional dive onstage and the consequent dive of a Tecate tallboy all over the stage floor.  Tiger High persevered and didn’t miss a beat of their engaging and infectious punk/guitar rock, a feat accomplished by drummer Greg Roberson, even without the full use of his left hand, which had previously been completely severed and reattached following an accident involving a pig and a glass door (you get the idea).  Despite having to duct-tape the drumstick in said hand during the band’s set, his drumming was anything but ham-fisted(!), and he provided a rock-steady foundation for the group’s imaginative performance. 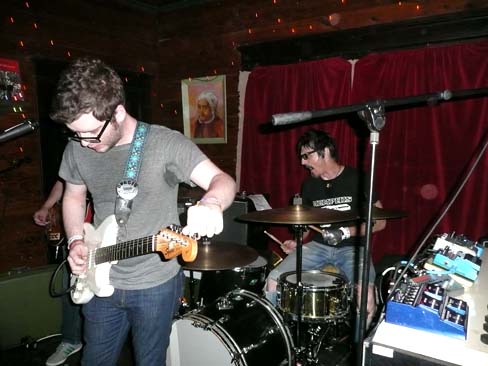 Following their last song, I rushed without hesitation to the Ballroom stage to catch the last Austin show by Feeding People, a band that I have really come to enjoy every time I see them.  Tonight was another great performance by every member of the five-piece group, from Louis Filliger’s slick but measured guitar playing, Michael Reinhart’s awesomely powerful drumming, the brooding organ and integral bass lines of Jane Reich and her brother Michael, to singer Jessie Jones’ otherworldly voice.  Regarding Jessie’s voice; the only somewhat accurate description of which I can think of is the wailing of a Banshee- a  feminine spirit in Irish folklore, typically seen as an omen of death and a messenger from the Otherworld.  Yeah, that’s about right. 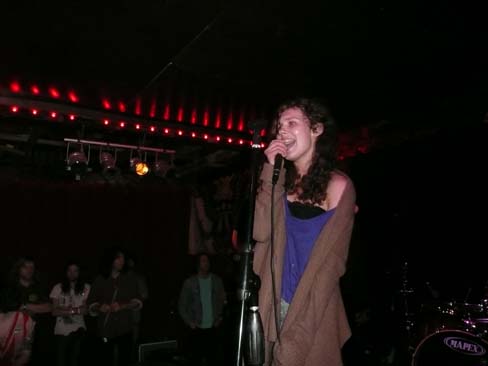 After Feeding People’s set, I rushed back into the Spider House bar, where Summer Twins were midway through playing a handful of their candid love-struck tinged harmonies and accomplished playing.  I had seen this group a few times before and had always been drawn into the melodic singing of Chelsea Brown, but tonight I noticed for the first time that they can fucking rock when they want to, particularly drummer Justine Brown, who, I feel, settles a running debate between my cousin and his uncle as to the relative stylistic merits and percussive abilities of female drummers. 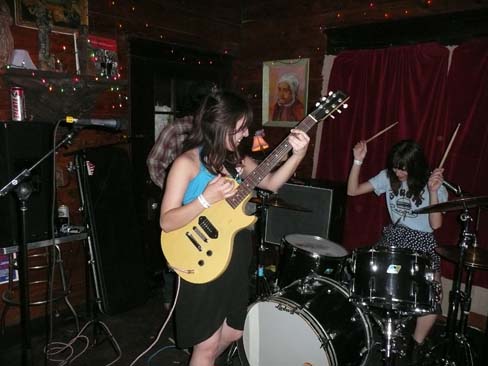 One final performance by King Tuff rounded out the night.  He played on the large stage in the Ballroom to a packed room of festival-goers going wild in the throes of their final night of SXSW and simultaneous St. Patrick’s Day revelry.  The new lineup of bassist Magic Jake and a percussionist known only as “Drums” is a good fit with King Tuff, cemented by their American flag spandex/Evel Knievel stage outfits.  Together they crashed their way through a number of the King’s finest, and gave the crowd one more chance to lose their minds and find their Soul (with a capital “S”) in the ritual of muzak non-stop that is Austin’s South by Southwest.  Cheers to another good year.

THE SHRINE + THE PARANOYDS + CAT SCAN @ HOUSE OF MACHINES